Today I’m pleased to be part of the blog tour for The Lyme Regis Murders. I’m sharing an extract from the book with thanks to Emma Welton of damppebbles Blog Tours for inviting me on the tour and the publisher for providing the extract.

A local reporter announces the horrific story, throwing the quiet town into turmoil at this shocking discovery.

Unused to dealing with murder on his peaceful seaside beat, the local Detective Chief Inspector has taken the easy option, pointing a finger at the step-father, Eric Goldcrest, as the only suspect directly linked to the children.

But wealthy Goldcrest, now forced to leave the marital home by his hysterical wife and the constabulary’s suspicions, has gone to ground. The only person he can trust to prove his innocence is unconventional, Private Investigator, Tammy Pierre. But as the case gets more complicated, Tammy, uncovering new evidence becomes a target herself, when first subjected to a brutal knife attack, and then chased by three big SUVs aiming to force her off the road. She now realises the seriousness of the case as her life is at risk, but by whom?

Possible suspects, Goldcrest’s business partners admit they hate the man for the past criminal gains he’s made at their expense. Could Tammy now be within their sights?

Fresh information has the town’s folk alarmed by news of the return, after twenty years in jail, of a convicted child rapist and murderer. Someone answering his description has been seen lurking in the back gardens of the Goldcrest children’s home late at night.

But the children’s murder is just the start, as killing follows killing and Tammy, still seeking to prove Goldcrest’s innocence, finds

herself groping for solutions in a nightmare of senseless slaughter.

Might revenge be the motive? Or is there something far more sinister happening? The Lyme Regis Murders will keep you riveted to the end.

Late summer, a sultry, shimmering afternoon, the sun’s blaze casting a lucid sheen over everything it touched, burnishing surfaces, scorching lawns, searing exposed flesh. A peaceful Saturday, when lovers walked the parks and families downed iced drinks, or perhaps tea and cakes in back gardens. When small children hooted and screamed as they got up to all varieties of mischief.

A cyclist’s bell tinkled rousing a tortoiseshell cat that chased across the front lawn. A flock of Canada geese soared overhead in a wide-ranging V-formation, swerving off in a sudden unexpected change of direction. A bee hummed nearby the front door. Beds of phlox and goldenrod swayed in the gentle breeze.

It was a time of stillness and tranquillity.

The woman’s howl was like that of a wounded animal. Something feline. A high keening scream, which turned into a raw cry of rage as she pummelled the female officer at her door on the chest. “NOOOOOOO NOOOOOOO! Not my babies. It can’t be. Please no, it can’t be,” she sobbed. “They’re someone else’s children. They’re not mine. They can’t be mine.”

In her middle thirties, the woman appeared as fragile as if she might break apart in a light gust. As if the news just imparted would shred her like tissue paper. Petite and trim as a ballet dancer, with wavy shoulder-length mid-brown hair, full rouged lips and retroussé nose, she had the sort of gamine good looks that seemed to cry out for the protection of someone bigger than she, someone physically stronger.

“Shall we sit down Mrs Goldcrest?” The uniformed officer, an older woman, tall and deploying a fair expanse of flesh, together with a budding moustache on her upper lip, led the smaller woman by the arm into the house.

Eleanor Goldcrest let herself be helped indoors where she sat at the black marble kitchen bar holding her head in her hands, weeping uncontrollably. Detective Inspector Margaret Copeland, accompanied by Detective Sergeant Susan Trevelyan, stood by saying nothing until Mrs Goldcrest’s crying began to abate. For all of their experience in handling these sorts of situations, the two women looked ill at ease. They kept glancing at each other as though one of them should say something. But not knowing what to say they both remained silent.

The house was a modern five-bed, redbrick detached, with a one hundred and fifty-foot garden, integral double garage and carriage drive. Situated in Pine Ridge, on the outskirts of Lyme Regis, it boasted glorious views of the surrounding countryside.

“Was it all three?” the young woman whispered. “Tell me it wasn’t all three.”

“I am so very sorry, Mrs Goldcrest.”

The Lyme Regis Murders is available from Amazon. 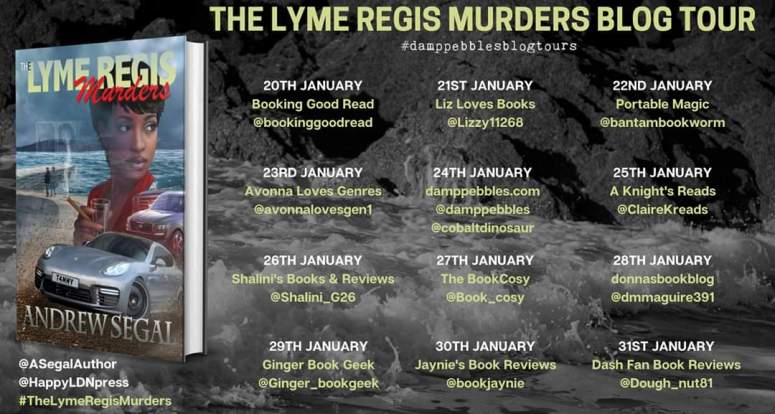 One thought on “Andrew Segal: The Lyme Regis Murders”