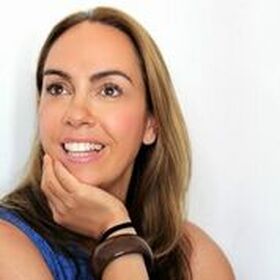 Today on Portable Magic, I am wishing Isabella May a happy book birthday with The Cocktail Bar. ​I am delighted to share my Q&A with Isabella May. My post is presented with thanks to Rachel at Rachel’s Random Resources for inviting me on the blog tour, and of course, to Isabella May for answering my questions!

Have you always wanted to write?

Subconsciously, yes. I have always being scribbling the quirky and the witty – from games of paper consequences passed gingerly around the classroom, through to cutting out the names of all the kids in my year at high school on paper… and imagining all sorts of funny and romantic storyboards with them. As you do.

What were your previous jobs? Have they helped you with your writing process?

Definitely. I worked in children’s publishing as a Foreign Rights manager for many years, selling translation rights for board books, pop up books, and novelty books all over the world. It was a very exciting career and I loved every minute. I would also say the impressive multi-tasking skills I have polished as a mum have their benefits, and transfer to writing novels too – and all that encompasses. I am also co-founder of an online women’s magazine, helped to set up its book club, looked after the editorial, and contributed hundreds of articles, all of which has been invaluable in laying the foundations to write full-time. Well, as full-time as I can with two kids who finish Spanish school at 2pm… and get 11 week summer holidays!

What was your inspiration for The Cocktail Bar?

I grew up in Glastonbury, where the cocktail bar is set. But back then there was nowhere (and I do mean NOWHERE) to go for a decent night out. Glastonbury in those days only seemed to cater for two groups of people: the boho and unconventional (as it gets!) and the cider drinkers. As a teen/early twentysomething, you had to travel to Bristol or Taunton for a sniff of a dance floor, or, indeed a cocktail. So, after I’d finished writing my debut novel, Oh! What a Pavlova, the seed of an idea came to me after seeing the flashy cocktail pics on Facebook of a friend who’d been holidaying in Florida: what if a cocktail bar (and one that didn’t just serve up Sex on the Beaches and Screaming Orgasms) set up in Glastonbury High Street? How would the locals react? I imagined the fireworks and started to frantically scribble them down.

How do you construct your characters? Do they have traits of people you know?

I’m not really sure. It’s like The Giant Idea Cloud in The Sky brings them to me, or something! But I go with the impulse, let those characters tell the story… and then by the end of the book I recognise that, just as you say, they really DO possess traits of a whole mix of people I know. It’s quite funny.

What does your writing process look like? Are you a plotter or a pantser?

I’m a real pantser. I love discovering, little by little, what my characters want me to know. This works far better for me than getting hung up on any outcome. Of course I need to have a theme and some kind of idea of direction, but I let my characters decide the rest.

How did you research for The Cocktail Bar? Did you enjoy it?

It helps to be a cocktail fan, and I’m definitely one of those! But I also read a lot around the subject; bartending, mixology, recipe books, professional training, Tequila and Guadalajara (where certain scenes in the novel are set), and the history behind the many claims to the cocktail’s invention.

Who are your favourite writers? Are you influenced by them?

I read widely so it’s really hard to choose as I like to take my inspiration from variety. At the moment I am a big fan of Zoe Folbigg, Julie Caplin and Alice Castle. All three of these writers have such quirky, inimitable styles and such an acute sense of observation and humour.

If you could invite three people, living or dead, to dinner, who would they be and why?

How to narrow it down? I guess it would have to be Prince, Nigella and Esther Hicks. Because what a legendary dinner party that would be…

Who would you least like to be stuck in a lift with and why?

I’d be lying if I didn’t say Donald Trump!

Who would play you in a film of your life?

Gosh, what a question. I used to (as in a fair few years ago now!) get told I looked like J Lo and Billie Piper… so I guess either, or both?

What do you like to do in your spare time?

What is next for you?

Well, I’ve just received a full manuscript request for book 4 from a rather exciting publisher… so keep your fingers and toes crossed for me that my novel about ice cream, rugby, Bath (the city), and the Mafia gets snapped up soon!

Book? That’s like asking me to choose my favourite child! The Alchemist by Paulo Coelho is certainly up there at the top though…

Book cover? You’re a tough question setter! Way too many to choose from. But I am particularly loving both versions of N.J Simmonds upcoming re-release, The Path Keeper. Check them out!

Film? I’m fickle with films. I can never have a favourite and I rarely watch anything twice. I did think The Return of Mary Poppins was pretty awesome though.

TV show? Living in Spain I watch very little TV as we can’t get the English channels without paying a fortune for them. Funnily enough, I really don’t miss it – and get to read a lot more books. I’m a fan of anything travel or cooking related though, plus a well-filmed animal documentary.

Colour? The rainbow. Again, I can’t choose just one; I grew up in Glastonbury!

The Cocktail Bar is available from Amazon.