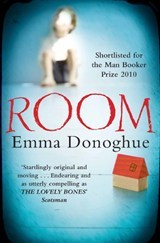 To five-year-old-Jack, Room is the world….

Told in the inventive, funny, and poignant voice of Jack, Room is a celebration of resilience—and a powerful story of a mother and son whose love lets them survive the impossible.

To five-year-old Jack, Room is the entire world. It is where he was born and grew up; it’s where he lives with his Ma as they learn and read and eat and sleep and play. At night, his Ma shuts him safely in the wardrobe, where he is meant to be asleep when Old Nick visits.

Room is home to Jack, but to Ma, it is the prison where Old Nick has held her captive for seven years. Through determination, ingenuity, and fierce motherly love, Ma has created a life for Jack. But she knows it’s not enough … not for her or for him. She devises a bold escape plan, one that relies on her young son’s bravery and a lot of luck. What she does not realize is just how unprepared she is for the plan to actually work.

Told entirely in the language of the energetic, pragmatic five-year-old Jack, Room is a celebration of resilience and the limitless bond between parent and child, a brilliantly executed novel about what it means to journey from one world to another.

Room is narrated by Jack, which gives the reader a childlike perception of life within Room. Jack’s narration means that some aspects of their situation are never fully explained, as we only learn what has happened through Jack’s recollection of his conversations with Ma. The reader is heavily reliant upon implied meanings within the novel, and this, coupled with Jack’s innocence, gives the novel a poignant tone, which leaves us willing the characters to safety and dreading any mistakes they may make along the way.  In addition, all the furniture and belongings in Room, including Room itself, are written as proper nouns. This highlights Jack’s limited view of the world, and helps to further immerse the reader in the environment of the novel.

Following their escape, Jack and his Ma find that life outside Room has changed more than they could have realised. His Ma  has a new stepfather, following the breakdown of her parents’ marriage during Ma’s time in Room. Her brother is also married with his own family. The outside world also presents challenges for Jack, who has never communicated with anyone besides his Ma, and struggles to break from the routines they established while they were confined to Room. Donoghue also draws our attention to potential issues that may not have been immediately obvious, such as Jack’s limited spatial awareness and Ma’s mental health. This adds a thought provoking dimension to the novel, which helps to maintain the reader’s interest to the end. I would have perhaps liked these issues to have been explored in more detail.

It is very rare that I find a book in which I can immerse myself so completely, but the development of Donoghue’s characters (particularly Jack) and her compelling storytelling make reading Room a very enjoyable experience.

Room is available from Amazon.