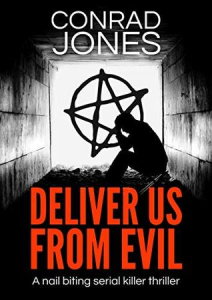 I’m pleased to be one of the bloggers on the blog tour for Deliver Us From Evil. My review is written with thanks to Heather at Bloodhound Books for inviting me on the tour and providing my copy of the book.

FROM BESTSELLING AUTHOR CONRAD JONES COMES A GRIPPING CRIME THRILLER WHICH WILL HAVE YOU ENTHRALLED FROM THE EXPLOSIVE START TO THE NAIL-BITING CONCLUSION.

The hunt is on and it’s never been so deadly.

Detective Braddick is summoned to a horrendous crime scene, where it appears a double murder has taken place. The victims’ bodies are missing and the police have no clue as to their identities or who killed them.

As the investigation snowballs, the potential body count rises and the Major Investigation Team have little to go on until DNA evidence is examined.

There appears to be no motive for the dreadful murders until an ancient script is found daubed on the walls of a nearby property.

As the clues are unravelled, Braddick and his team realise they are dealing with something they have never faced before. Because this time they’re tracking evil itself…

Deliver us from Evil is a fast-paced crime thriller full of breathless action. It can be read as book 4 in the international bestselling DI Braddick series or as a truly unmissable stand-alone thriller. It will appeal to fans of authors like Charlie Gallagher, Angela Marsons and Rob Ashman.

This book has absolutely everything! It’s a fast paced, high intensity novel with tension, corruption and many twists and turns . I did not want to leave the investigation until I had finished the whole book. It takes some time for everything to become clear so that I could join the dots as to who was responsible,  but I loved the way that Jones made me think as I was reading.

I seem to be saying this in many of my reviews lately, but Deliver Us From Evil is a book for the strong of stomach. There are some very graphic descriptions that will have even those who love a gory scene struggling to hang on to their breakfast. This approach did bring it home to me exactly how horrible the perpetrators were and made me root for Braddick and his team.

Deliver Us From Evil Is the fourth book to feature Detective Superintendent Braddick. I’ve not read the predecessors, which may have been helpful to give me some background information, but reading as a standalone did not spoil my enjoyment of it. I loved Braddick’s no-nonsense attitude and his relationship with his sergeant,  Laurel Stewart is brilliant as together, I could trust them to catch the vile people involved in the crimes. I would love to read more from them.

One of the themes in Deliver Us From Evil is occult rituals. Jones has obviously researched these in great detail and I was fascinated to learn more about them and the power they hold for some people.

Deliver Us From Evil is available from Amazon

Don’t forget to check out the rest of the blog tour!