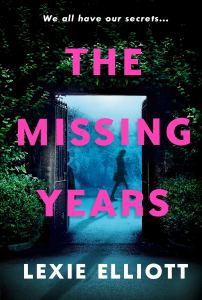 Today I’m pleased to be sharing an extract as part of the blog tour for The Missing Years. My post is written with thanks to Anne Cater for inviting me on the blog tour and the publisher for providing the extract

She thought she would never go back…

Ailsa Calder has inherited half of a house. The other half belongs to a man who disappeared without a trace twenty-seven years ago. Her father.

Leaving London behind to settle her mother’s estate, Ailsa returns to her childhood home nestled amongst the craggy peaks of the Scottish Highlands, accompanied by the half-sister she’s never taken the time to get to know.

With the past threatening to swallow her whole, she can’t escape the claustrophobic feeling that the house itself is watching her. And when Ailsa confronts the first nighttime intruder, she sees that the manor’s careless rugged beauty could cost her everything…

The Manse is watching me.

At first I don’t notice it, I’m too involved in my study of the impos- ing gray stone edifice before me. It’s a tall structure—three stories, and the first two must have high ceilings—with a turret and stepped ga- bles like sets of staircases. Grand baronial style, I think, the half- remembered phrase leaping into my mind. I recognize the ground-floor bay windows that frame the wide doorway from the old battered pho- tograph that has traveled as far and wide as I have, but as I squint at them, I become aware of an acute, uneasy silence, as if the whole build- ing is holding its breath. There’s a queer stillness to the dark, unreflec- tive granite, to the slate roof; as I lift my eyes upward, I notice that even the sky behind is still—still and leaden and looming. I turn my attention back to the windows, wondering whether the photograph I always keep beside my bed was taken in front of the left or the right one, and as I study them, I have the disturbing sense that whatever lurks beneath the flat, gray surface is stirring; the windows are craning forward, crowding toward me. I blink to try to find a wider perspec- tive, but then I notice that even the turret on the left is peering down; I have the sensation that it’s swooping, rushing toward me, and my stomach lurches as if the lawn has dropped away beneath my feet. The house means to swallow me, I think with an irrational flood of panic, swal- low me whole—and then what?

“Jesus.” It’s Carrie, my half sister, pushing her badly cut fringe out of her eyes as she joins me on the mossy lawn to survey the house. Her voice drags me back to normality with a hard jolt. I feel like I’m stag- gering from the impact. “This is a bloody castle.”

I can feel her slanting gaze on me. “So you remember?”

Do I? Or have I created memories, built on the back of the photo- graph and the tales of others? Snatches of phrases, half-formed images, crafted in a child’s mind into a castle worthy of the Brothers Grimm, the type of castle in tales that have nothing to do with fairies. I weigh my answer. I have an irrational feeling that Carrie isn’t the only one listening. The Manse has been waiting a long time for me—a quarter of a century, give or take—but I imagine stone can be very patient.

I’m imagining rather a lot today. Tiredness from the long drive, presumably. Stick to the facts, Ailsa.

“Do you?” prompts Carrie.

Suddenly there is an earsplitting crack. Instantly I’m turning, scan- ning around, grabbing Carrie’s arm with one hand to pull her with me. “Ailsa,” I hear her say as I search the area wildly. Then, louder, more urgently, “Stop! It’s all right. It’s just a branch. On the oak. It broke.” She catches me with her cool silver-gray eyes, so like our mother’s, the only part of her that is. There’s a drumming in my ears. It takes me a moment to realize it’s my heartbeat. I take a breath, then another, star- ing into those pale eyes. “It’s okay,” she says gently. “Just a branch. Look.” I follow her pointed finger. There’s a very old oak tree that I hadn’t noticed but somehow knew was there, to the right of the house. The lowest branch, thicker than the width of a well-built man, has cracked and is dangling at an odd angle. The twisted wood looks dead and dry. The tree is uncomfortably close to the house; its roots must be irreversibly tangled with the foundation. They must have burrowed into the dank earth, thin tendrils slipping through cracks in the brick- work below, growing and expanding over time, tightening around the bricks and pushing out the mortar, inveigling themselves until house and tree became irrevocably entwined. Rot in one can only lead to the same in the other.

The facts, Ailsa. Stick to the facts.

“Well,” says Carrie, drawing in a deep breath. Her thin shoulders rise and fall with the draw of her lungs. “That was dramatic.”

I’m not sure if she’s referring to the broken branch or my reaction. I turn away to ward off her gaze. “Sorry,” I say, looking at the tree in- stead. Only the broken branch appears dead; the rest seems to be thriv- ing. “It was . . . Anyway. Sorry.” I head for my little hire-purchase Golf before she can press her point, whatever that may be. “Time to move in, I guess.” I throw a swift glance at the Manse as I open the boot of the car, but it’s not watching, breathing, swooping or in any way exhibiting animated behavior. The facts: it’s just a rather impressive old Scottish manor in the middle of nowhere that  happens to be mine.

The Missing Years is available from Amazon.

One thought on “Lexie Elliott: The Missing Years”