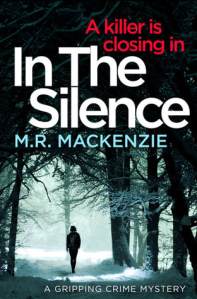 Congratulations to author MR Mackenzie, whose novel,  In The Silence, is longlisted for the McIlvanney Prize and shortlisted for the Inaugral Debut Prize. I originally read and reviewed In The Silence in September 2018 and I’m delighted to reshare it today. The original review was written with thanks to Bloodhound Books for inviting me on the blog tour and providing my copy of the book via Netgalley.

When Anna, a criminology lecturer, does return to Glasgow from Rome, during the coldest winter in memory, tragedy strikes. While out with her best friend from school, Anna has a chance encounter with a former flame, Andrew, and later that night discovers Andrew stabbed and dying on a blanket of snow.

Soon Anna finds herself at the centre of the investigation as the star witness for the police, and embarks on investigating the case herself. But Anna doesn’t realise the danger she is in and soon finds herself in trouble.

When another body shows up, who has links to the first victim, it appears that the motive may lie buried in the past.

As Anna gets closer to the truth, the killer starts closing in.

But can she solve the gruesome mystery before the killer strikes again?

From the moment I met Anna, I felt able to relate to her. She is uncomfortable in crowds and would rather not visit her past, yet when the investigation takes hold she comes into her own and is determined and stubborn, yet very compassionate, reminding me a little of myself. She has a very well plotted back story, which makes her a very richly written character that I could easily get behind.
In The Silence is absolutely brimming with tension. Mackenzie creates an oppressive atmosphere from the very first page, with Anna’s unease and the inclement weather. It steps up a gear when the first body is found, and there is a very definite sense that most of the characters, including Anna are lying or holding something back. This makes the novel very compelling, and I had to get to the truth. The novel builds up to a huge crescendo, and there were several moments where I was holding my breath, floored by the twists and turns until the killer is finally revealed.
​There are scenes of rape in In The Silence, which may be triggering for some readers. The violence is not gratuitous, but it is described in some detail. It is difficult to expand further without giving away spoilers, but I felt that Mackenzie raised awareness of issues of consent in a very thought provoking manner.
In The Silence is available from Amazon.