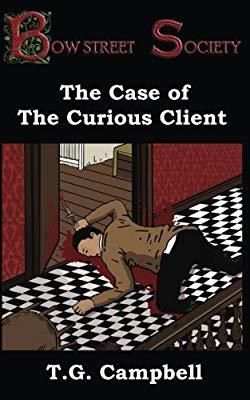 My review of The Case Of The Curious Client is written with thanks to TG Campbell for my copy of the book.

The Bow Street Society is a fictional group of amateur detectives, operating in Victorian London, that feature in the murder mystery writings of award winning crime author, T.G. Campbell. Each of its civilian members has been enlisted for their unique skill or exceptional knowledge in a particular field derived from their usual occupation. Members are assigned to cases, by the Society’s clerk, Miss Trent, based upon these skills and fields of knowledge. This ensures the Society may work on the behalf of their clients regardless of their client’s social class or wealth; cases that the police either can’t or won’t investigate. From an artist to an illusionist, from an architect to a veterinarian, the Bow Street Society’s aim is to provide justice by all and for all.

In The Case of the Curious Client, the Bow Street Society are hired by Mr Thaddeus Dorsey to locate a missing friend he knows only as ‘Palmer’ after he fails to keep a late night appointment with him. With their client’s own credibility cast into doubt mere minutes after they meet him though, the Society are forced to consider whether they’ve been sent on a wild goose chase. That is, until events take a dark turn, and the Society have to race against time to not only solve the case, but to save the very life of their client…

I really enjoyed The Case Of The Curious Client and, moreover, TG Campbell’s writing style. It’s brilliantly descriptive, often so vivid that I could imagine myself walking the London streets and entering the character’s houses, despite its late 19th century setting  The style of writing is a nod to that period, wonderfully observed and very easy to read.

The Case Of The Curious Client is the first of a series featuring the Bow Street Society (the fourth of which was published yesterday and is available here), a group of individuals from various professional backgrounds who bring their skills to investigate cases that lie outside the jurisdiction of the police. I enjoyed getting to know them all and look forward to learning more about their individual stories which began in an interesting manner in this novel.

The themes in The Case Of The Curious Client aren’t new themes: there is one theme in particular that has been covered quite extensively in literature. However  TG Campbell offers a new angle on it, which allowed her to add more tension to the novel. There are lots of suspects for this crime, and most of them have secrets they wish to hide. I was intrigued by this aspect of the novel and was kept engaged as the secrets unravelled.

The Case Of The Curious Client is available from Amazon.