Today I’m delighted to be part of the blog tour for Cage. This extract is shared with thanks to Anne Cater for inviting me on the tour and Orenda Books for providing the extract.

Drugs, smuggling, big money and political intrigue in Iceland rally with love, passion, murder and betrayal until the winner takes all … in the masterful, explosive conclusion to the award-winning Reykjavík Noir trilogy…

The prison doors slam shut behind Agla, when her sentence ends, but her lover Sonja is not there to meet her.

As a group of foreign businessmen tries to draw Agla into an ingenious fraud that stretches from Iceland around the world, Agla and her former nemesis, María find the stakes being raised at a terrifying speed.

Ruthless drug baron Ingimar will stop at nothing to protect his empire, but he has no idea about the powder keg he is sitting on in his own home.
At the same time, a deadly threat to Sonya and her family brings her from London back to Iceland, where she needs to settle scores with longstanding adversaries if she wants to stay alive.

With a shocking crescendo, the lives of these characters collide, as drugs, smuggling, big money and political intrigue rally with love, passion, murder and betrayal until the winner takes all … in the masterful, explosive conclusion to the award-winning Reykjavík Noir trilogy.

The cell door shut behind Agla’s back with a smooth click. All the doors and walls in the new Hólmsheiði Prison were sound-insulated, so the women’s wing was quiet in the evenings. There was no slamming, and no calls or mutter of televisions carried through from the cells of the other women serving their sentences there. Instead there was a heavy silence, which seemed to engulf her like water – and she was sinking slowly and gently to the bottom.

She had known that being locked up wasn’t going to be a pleasant experience. A few years earlier she had been on remand for a couple of days while the market-manipulation case against her was being investigated, so she had been expecting something similar. But this was unlike anything she had anticipated. It was one thing to spend two or three days in a cell, at the end of which her lawyer had appeared like a guardian angel, sweeping her away to dinner; it was quite another to walk into this building that still smelled of damp cement and filler, knowing that it would be her world for the next year.

Now she had a month to go before she was eligible for parole. In her mind she had divided her sentence into sections: she had to complete half of her time and then the rest would be on probation. But now that the second section was within sight, she was consumed with trepidation. Somehow she had become the animal in the zoo that dared not leave its cage for fear of looking freedom in the eye.

As her time in prison had passed, she had found the cage an increasingly comfortable place to be; to the point where she was numbed by it. There was now something reassuring about having all her power taken away from her. The more she had complained about the hard mattress and the piss-warm shower, the more a simple fact had filtered through into her consciousness: whatever she did or said in here made no difference. Her own will was of no consequence.

She had the impression that life was progressing evermore slowly, and she was finding it increasingly difficult to make decisions. The warders would often suggest she played games or did some handiwork, or brought her books from the library; but she could no longer be bothered to play, work or read. The same seemed to apply to the other women. She’d seen those whose sentences had begun after hers turn up furious and bristling with pain, just as she had; but after three months all their fury had dried up, and now they hardly even spoke to each other.

Two of the Icelandic prisoners had arrived at the same time as Agla. With the justice system overloaded, like Agla and many others convicted of non-violent offences, they had had to wait a long time before they could start serving their sentences. Another woman had come here from a prison in the north, and one had joined them some time later. The foreign women were on the other corridor, so they had come and gone without Agla noticing. All of them had been mules – young women from Eastern Europe, dressed in track suits, with dyed hair and poor English. Like the Icelandic prisoners, they kept to their own corridor, but somehow their community seemed to be livelier, although the gales of laughter and the songs could sometimes turn into screams and fights.

At the beginning of her sentence, Agla had made daily visits to the fitness room, accepted interviews with the prison chaplain – if only to have someone to talk to – and made an effort when it was her turn to cook. Now, though, she no longer had the energy for any of this, and her fellow prisoners were lucky to get rice pudding and meat soup, as she couldn’t summon the energy to cook anything more demanding. Not that they complained; they had probably stopped tasting any flavour in the food long ago.

She took the nail clippers from her vanity bag, then used them to pick tiny holes in a sheet, so that she could tear it into strips. Two strips would definitely be needed, twisted together so they were strong enough. She had planned this a long time ago – when she had been informed that her probation was coming up, but she hadn’t made a decision about a precise day. Earlier, though, just after the evening news on TV, she had had the feeling that it was now time. Her decision was accompanied by neither sorrow nor fear, but instead by a kind of epiphany, as if a fog in her mind had lifted and for the first time in many months she could clearly see that this was the right thing to do.

It took longer than she had expected to rip up the sheet, and when she wound the two strips together, they lost half of their length, and became a short piece of rope. She looked around and immediately saw the solution, as if, now that the moment was near, new possibilities were appearing that she had not seen before. She unplugged the power cable for the TV and unwound it from its coil at the back of the set. It would work fine; it wouldn’t fail.

She made the sheet rope into a loop that would tighten around her neck, and then tied the loop to the cable. She got to her feet and went over to the radiator on the wall by the door. It was just about the only thing in her cell that anything could be tied to. Agla hoped it was high enough up the wall. She tied the cable to the top of the radiator and pulled at it – gingerly at first, afraid that the makeshift noose would give way, and then with all her strength. It seemed secure. She hoped that her body would not let her down at the last moment, responding with some self-preservation instinct and trying to keep her on her feet.

For a second the silence was broken by a blackbird’s song, as it made its nest somewhere nearby. The thick walls were not able to stifle the cheerful birdsong, and it triggered in Agla an immediate desire to step outside into the fresh air and inhale the scent of the blossoming birch trees. But this urge disappeared the second the birdsong came to an end, and images of her mother and Sonja passed through her mind.

The pain and the regret that came with these thoughts were so bitter, her heart ached; but at the same time she felt a sense of relief that this would be the very last time she would be tormented like this. Never again would she be outside these walls, having to stand alone, wondering why Sonja had abandoned her. Never again would she have to face the endless choices that freedom offered, and that, up to now, had mainly brought her misfortune. It came as a relief that her life was over.

She stood with her back to the radiator, pulled a plastic bag over her head and looped the noose about her neck. The moment she had tightened the noose, she sighed once, with satisfaction, and then sat down.

***
Cage is available from Amazon. 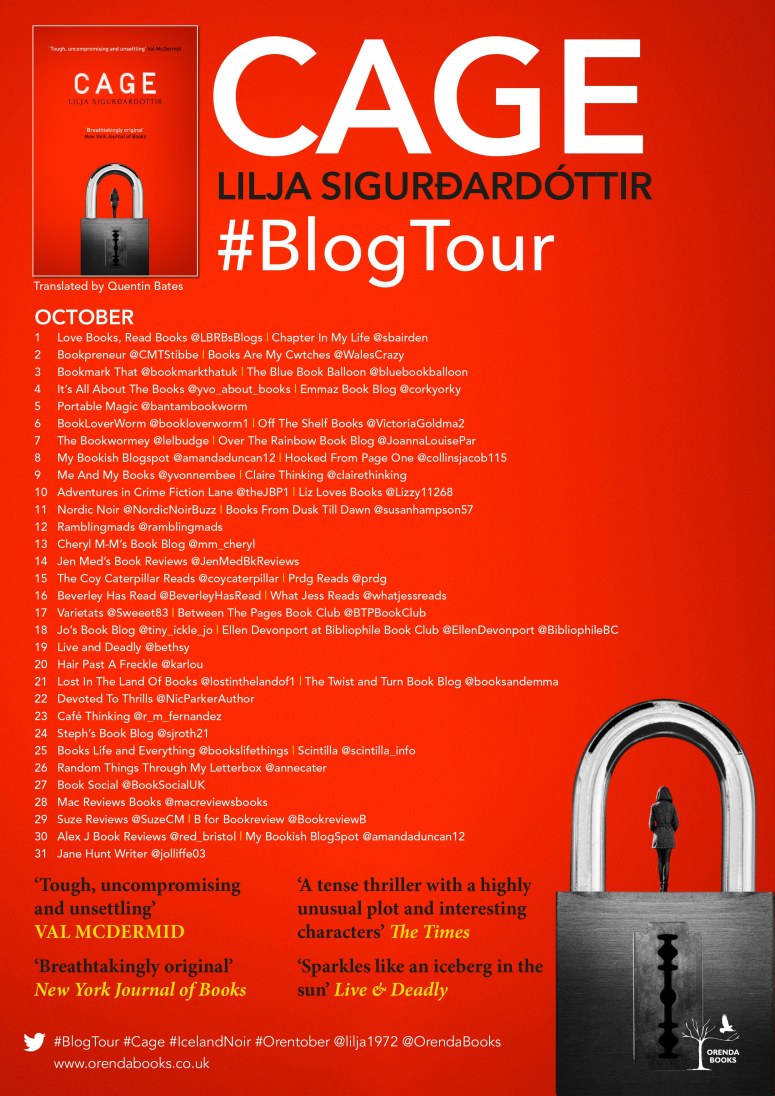 One thought on “Lilja Sigurdarddottir: Cage”