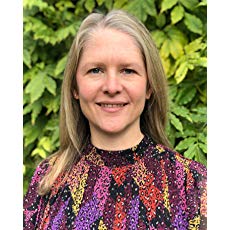 Today I’m pleased to be taking part in the blog tour for All In Her Head. I’m sharing my Q&A with author Nikki Smith with thanks to Anne Cater for inviting me on the tour and of course, Nikki Smith for answering the questions!

Can you tell us a little bit about All In Her Head and what sparked the idea behind it?

Thank you so much for having me! I can’t say too much about the book without giving away the entire plot, but All In Her Head is a very timely, psychological suspense novel where nothing is as it first seems.

Alison is convinced she is being stalked by her ex-husband, Jack, who seems determined to find her. Then the mention of one name turns her world upside down and as the past and present collide both Alison and Jack have to confront a terrible truth.

The idea behind the novel was prompted by my experience of motherhood and how a woman’s identity changes once she has had children. People who’ve read it have commented that it contains elements they didn’t see coming and I hope that’s the case!

What was your journey to getting published?

I wrote a novel after I left University many years ago (which was dreadful!) but when I couldn’t find an agent to represent it, I gave up and concentrated on a career in finance. I still wrote, but just stories for my own pleasure and not anything that I showed anyone. Then many, many years later, I was contacted on Facebook by someone I’d been at school with. They asked me if I’d ever done anything with my writing as they still remembered the stories I’d read out in class at school. It was a now or never moment. I signed up for a Curtis Brown creative writing course where I started writing All In Her Head. Then I won a competition to be mentored by the author Amanda Reynolds. She helped me refine my opening chapters before I sent them off to the amazing literary agent Sophie Lambert who asked to meet, and agreed to represent me. We worked on the book for a few months before she submitted it to publishers. Orion made me a pre-empt offer for a two book-deal which I accepted as I was so impressed with my editor’s (Harriet Bourton) vision for the book.

What’s been your best moment as an author so far?

As a debut author with her book being published on 2 April, I hope there will be many of these to come! Up until now, it has been such a thrill to hear from other authors who I admire who’ve read and liked the book. Recently I was lucky enough to go and visit Clays printing factory in Bungay, in Suffolk where I saw All In Her Head roll off the presses. It was a very special moment as it’s something I’d always dreamed of doing. I couldn’t believe how many different processes go into making a physical copy of a book – it was absolutely fascinating. I’m also really excited to be going to hear the amazing Helen Keeley record the audiobook version of the novel – she has the most incredible voice and I can’t wait to hear what she does with it.

I’m a morning person, so on an ideal day, I’ll drop my daughters at school and then work for around six hours. Then, if I have a deadline, I’ll do a few more hours in the evening and at weekends too. But life often gets in the way, so it’s not always possible to get big chunks of time like this – I often have to just grab half an hour where I can. Before I got my book deal when I was working full-time, I used to get up really early to write for a couple of hours before my daughters woke up and then do a couple of hours again in the evening. I think you just have to do what you can, when you can and set yourself weekly word count goals to try and stay on track.

Do you have any advice for aspiring psychological suspense writers?

Read widely both inside and outside your genre. It’s important to know what else is out there – and you can always learn from what other authors have done. I’m a plotter, so I find spreadsheets and word counts very useful for keeping on track and working out where I’m supposed to be going, but I would say that the voice of my characters is as important as the technical plotting. It is only when I know my characters inside out that the novel really seems to come to life for me.

What books would you recommend to fans looking for stories similar to your own?

I wouldn’t like to compare my writing to anyone else’s, but other authors whom I love to read and really admire whose work really appeals to me include people such as Louise Candlish, Erin Kelly, Sarah Vaughan, Lesley Kara and Harriet Tyce.

Can you tell us a bit about what you’re working on next?

I’m just finishing the first draft of another psychological suspense novel about family secrets and how the image we present to the outside world often hides the truth of what is going on in our lives.

And lastly, what four words best describe All In Her Head?

I think Lesley Kara summed it up brilliantly – Clever and emotionally charged.

All In Her Head is available from Amazon.

One thought on “Q&A with Nikki Smith”