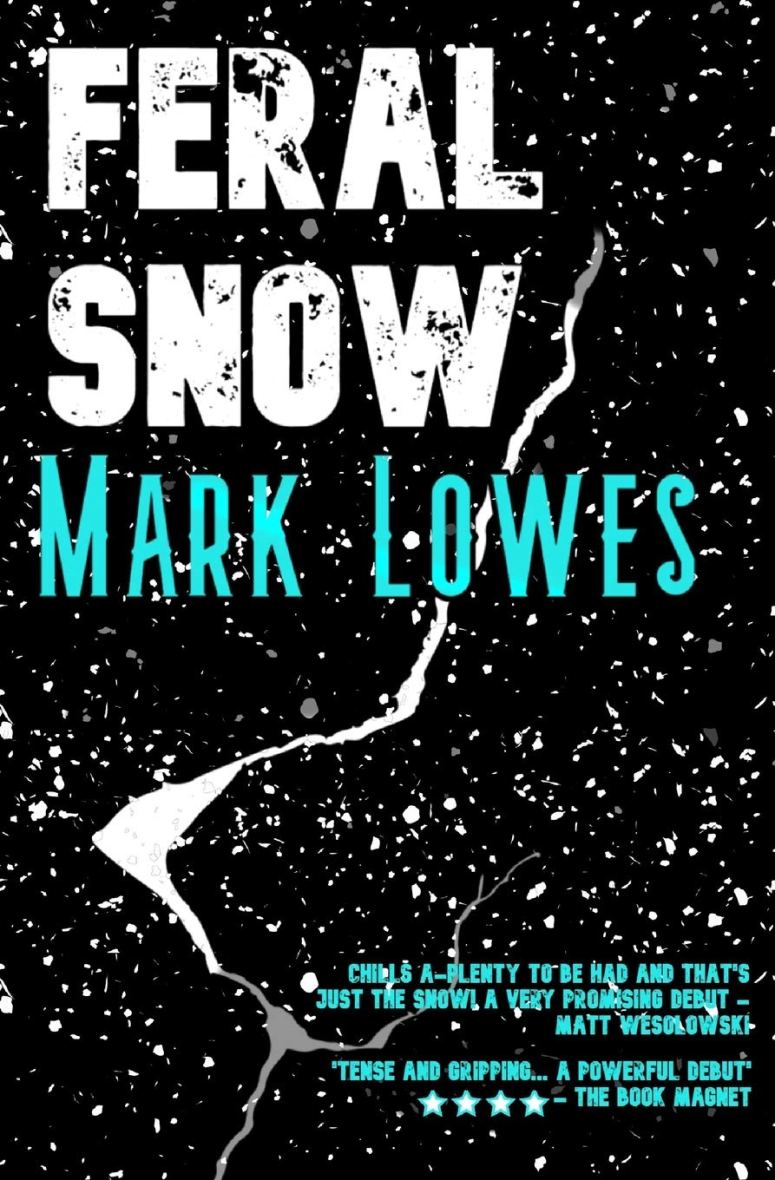 Today I’m pleased to be taking part in the blog tour for Feral Snow. I’m sharing an extract with thanks to Anne Cater for inviting me on the tour and to the publisher for providing the extract.

Alone and stranded in the Arctic wasteland, would you risk your life to save a stranger or try to get home?

Paul is a father-to-be; traumatised by his past, he’s terrified of becoming a father after his own beat him until he was unilaterally deaf. While working as a freelance cameraman in the Arctic, he’s caught in a blizzard, separated from his crew, and falls into a chasm. Alone, and waiting for death to come, personal demons plague his mind.

When a young native girl falls into the chasm with him, Paul must learn how to accept responsibility and what it takes to give your life for a child.

FERAL SNOW, while a tense and action-packed story, is an intimate journey between two polar opposites and how love can be forged in the unlikeliest of circumstances.

It has been compared to The Revenant, 127 Hours, and The Road by Cormac McCarthy.

How can he still be alive?

The snow’s blinding. The whiteness of it, dazzling like looking directly into the pale sun. When Marie looks away, she sees spots in her vision for a few seconds and she tries to blink them out of sight. The wind freezes her cheeks into blotchy red patches as she cradles the yellow satellite phone in one hand. The scarcity of it. The sheer desolation. It’s the closest to a dystopia than she’s ever seen before.

No one can survive being alone out there, she thinks. She pictures a body, frozen solid, consumed by ice and snow. She imagines him curled up with both hands around that sonogram he carries with him. Ice glittering on his skin. Eyes closed. He could be sleeping if not for the blue tinge to his lips and the layer of frost covering his eyelids, nose and mouth.

“Shut the door, will ya?” Curly’s voice comes from behind. He’s wrapped up in a grey blanket, holding it in a fist against his chest. Behind him is a wall of monitors showing different shades of white and grey. They flick from one image to another, showing everything and nothing in equal measure.

“They should be back by now, surely?” Marie says, still standing at the door looking out onto the white plains. She has her own blanket but it billows around her like she’s a widow stood on the edge of a cliff awaiting her lost sea husband’s return.

Curly sighs. His shoulders sink into his blanket. The orange fuzz on his face is growing like ivy. “I told him. I told him to be careful. It isn’t something he can just do. He’s gotta be invested.”

Marie turns away from the door then, her forehead creases. Between her finger and thumb she fiddles with the small golden cross on a chain around her neck. “Feeling guilty?”

The radio behind Curly crackles into life, “Matthew, Marie, they’re here. Just bringing them around now.”

Without picking up the receiver or waiting to hear the end of the message, Marie and Curly bolt out the open door, forgetting to close it on their way out. It clatters in the wind as the voice on the radio continues to trickle out into the Arctic air.

Marie sprints across the snow as fast as she can. The white powder kicks up behind her, spraying a plume in Curly’s face. She rounds a corner and sees a group of Skidoos driving their way towards them. There are six in total. Marie counts how many climb off their motorised snowmobiles. Six left. Six return. Scenarios run through Marie’s mind. Maybe Rand lost one of his men or they stayed behind for whatever reason and Paul is one of these Skidoo riders clad in bright coloured thermal coats. She tries to remember what he wore before they lost him: blue, maybe blue. She looks for the colours among the riders but doesn’t see it. Maybe Paul is arriving a different way. Maybe… Maybe. These aren’t plausible scenarios and Marie knows they aren’t.

She recognises Mike instantly. His gait. His shuffling of his boots in the thick snow. His dark skin against the sheer white.

Mike approaches them, taking off his goggles and squinting tears away.

At this point, Marie just wants to know. She wants to know if they found him, even if he is dead. But then again, surely, she would see Paul’s lifeless body draped over the back of one of these Skidoos. Or maybe they left him there. Again, maybes.

“But the satellite shows him walking away from the cabin,” Curly chimes.

“Yeah, I know. We also found a polar bear’s body. Had a knife in its hind leg. Probably bled to death.”

Marie brings her hand to her mouth. Tears now freeze on her cheeks. “We did find this,” Mike says, holding up Paul’s handheld camera. Curly’s mouth opens and closes, no words, just the movement.

The three of them head to Polaris Hall, the main communications hub of Alert, where Marie and Curly were just now. Wally Rand is the fourth member to join them. He closes the door as he enters behind them.

Marie nods, again, no words. It seems grief has no words.

“Here, let me,” Rand says and takes the camera from Mike with such gentleness, he could have been their doting father. He leans behind the desk, his thick middle resting on the wooden surface. He takes two thick cables – a power cable and a HDMI – and plugs them into the back of the camera. He then presses buttons on the remote as Marie takes a seat next to Curly. She resumes playing with her cross.

Paul’s face appears on the screen and there’s a collective gasp from all three of them: he looks gaunt. His cheeks are hollow and his skin is as pale as the snow outside. His eyes are red-rimmed and sunken in their sockets. They can almost see his teeth through the taut skin stretched across his face. He has a fuzz growing too, same as Curly, but Paul’s is black with flecks of copper and silver. In the hair above his ears, small silver patches pepper his dark matted hair. He looks like a ghost of what he was. A man who has walked through a frozen hell. It’s the first time Mike, Marie and Curly have seen Paul in thirteen days.

Paul’s broken, hoarse voice comes through the speakers, “I can still remember the look on my dad’s face. He had realised he’d taken it too far. His jaw hung open. His eyes were wide. He knew. And then I can’t remember anything other than waking up in the hospital.”

Paul pinches the bridge of his nose and clamps his eyes shut.

Marie glances over at Mike who’s got tears in his eyes and a tense, pulsing jaw. He swallows hard.

Together, they watch in haunting silence.

Feral Snow is available from Amazon. 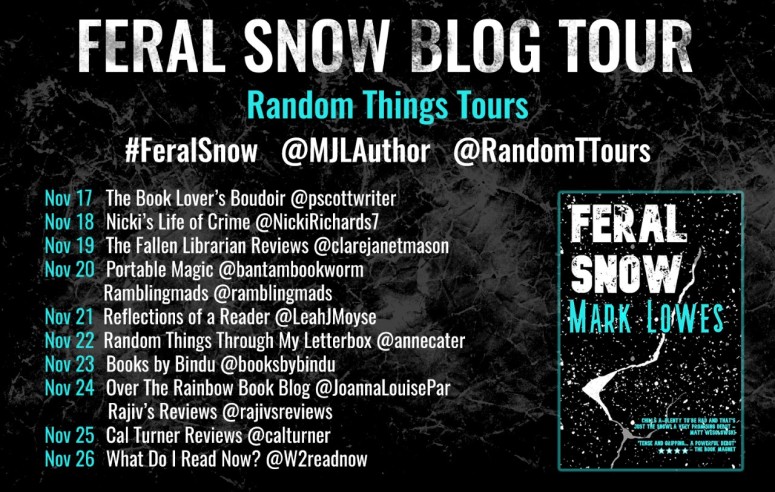