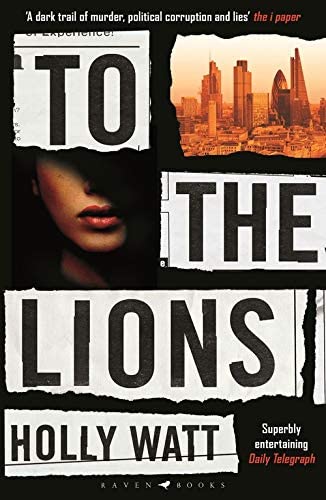 A journalist must follow the clues, no matter how far that takes her.

Casey Benedict, star reporter at the Post, has infiltrated the lives and exposed the lies of countless politicians and power players. Using her network of contacts, Casey is always on the search for the next big story, no matter how much danger this might place her in, no matter what cost emotionally.

Tipped off by an overheard conversation at an exclusive London nightclub, she begins to investigate the apparent suicide of a wealthy young British man, whose death has left his fiancée and family devastated.

Casey’s determined hunt for the truth will take her from the glitz of St-Tropez to the deserts of Libya and on to the very darkest corners of the human mind.

I’ve heard so much about To The Lions, and I’ve wanted to read it for a long time. It did not disappoint and I was immediately taken in by Watt’s wonderfully descriptive writing. Throughout their investigation, Casey and her team travel to several different countries and I was transported to their locations every time.

To The Lions is the beginning of an intriguing new series featuring Casey Benedict. I enjoyed getting to know her, and I loved her intelligence and ambition. I think there is still much more for us to learn about her and I look forward to seeing what Watt has in store for her.

As the novel reaches its end, Watt allows the tension to build and there is a definite sense of danger as it is clear that Casey’s investigation involves taking a few risks. I was on the edge of my seat wondering if Casey and her team would be safe.

To The Lions is available from Amazon.