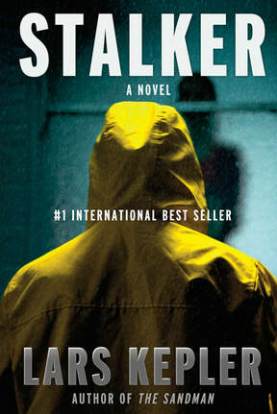 Today I am hosting one of the stops on the blog tour for Stalker. My review is written with thanks to Abby Endler from AA Knopf for inviting me on the blog tour and for my copy of the book via Netgalley.

The internationally bestselling authors of The Sandman and The Hypnotist return with a terrifying new thriller: Detective Joona Linna–recently returned from compassionate leave–reunites with hypnotist Erik Maria Bark in a search for a seemingly unassailable sadistic killer. The Swedish National Crime Unit receives a video of a young woman in her home, clearly unaware that she’s being watched. Soon after the tape is received, the woman’s body is found horrifically mutilated. With the arrival of the next, similar video, the police understand that the killer is toying with them, warning of a new victim, knowing there’s nothing they can do. Detective Margot Silverman is put in charge of the investigation, and soon asks Detective Joona Linna for help. Linna, in turn, recruits Erik Maria Bark, the hypnotist and expert in trauma, with whom Linna’s worked before. Bark is leery of forcing people to give up their secrets. But this time, Bark is the one hiding things. Years before, he had put a man away for an eerily similar crime, and now he’s beginning to think that an innocent man may be behind bars–and a serial killer still on the loose. . ..

I enjoyed reading The Sandman  last year, so I was eager to see what Joona Linna would get up to next. He does not appear straightaway, but his colleague, Margot Silverman heads up a team that are easy to get behind. Her determination to find a chilling killer is incredible, especially whilst heavily pregnant, and I wanted to know the identity of the killer from the beginning.
At the beginning of Stalker, the novel has two distinct strands: the official investigation into the stalker, and Erik’s work with Rocky. I found both strands fascinating, but was particularly intrigued by Erik and his methods. It took me a while to work out where the story was going, but eventually Kepler weaves everything together expertly and I was mightily impressed.
Stalker is not for the faint hearted: there are lots of bloody murders and the actions of the killer are seriously creepy. Kepler builds the atmosphere wonderfully from beginning to end, and as the attempts  to catch the killer gather pace, I was well and truly gripped by the sense of danger. The reveal of the killer was totally unexpected for me, and I am still trying to get my head around what the killer did.
I intend to catch up with the rest of this series as soon as possible.
Stalker is available from Amazon.
You can follow the rest of the tour here: 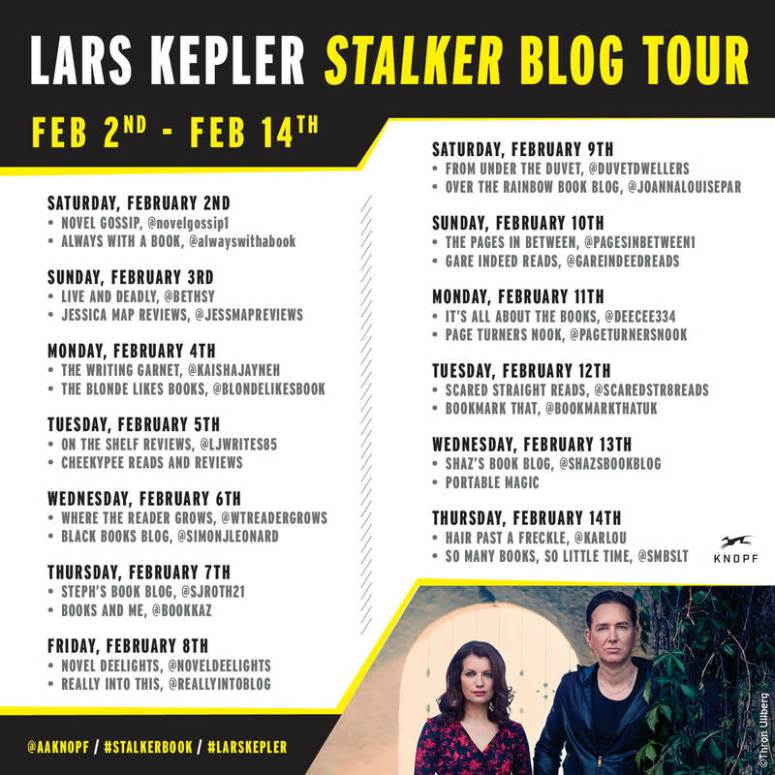