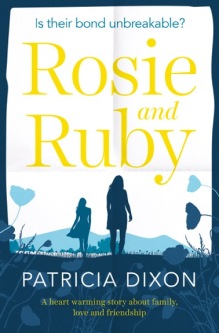 Today is my turn on the blog tour for Rosie and Ruby and I am delighted to be sharing an extract from the book, with thanks to Heather at Bloodhound Books for inviting me on the tour and providing the extract..

Ruby lives one-step away from poverty on a rundown, crime infested estate in Manchester, with Stella, her feckless, self centred a mother.

In the quiet suburbs of Cheshire Rosie, Ruby’s cousin, leads a charmed, middle class existence but feels suffocated by her domineering mother Doreen.

Although Stella and Doreen have little in common, they share the inability to show the love and loyalty that their daughters deserve.

Meanwhile, Olivia, a member of the elite Cheshire set, is aloof and distant, rattling around in her sprawling mansion, attending charity functions and hosting infamous bridge nights.

Her errant son Marcus lives his life in the fast lane, maximising the perks of the family firm whilst enjoying his jet setting bachelor existence, well away from the watchful eyes of his disapproving mother.

But when Ruby meets Marcus her life begins to crumble and one by one the secrets she has kept are exposed.

Can Rosie and Ruby’s bond survive? And in Ruby’s hour of need, will her cousin keep her promise, and come to her rescue?

Remembering the events of that night still made Ruby feel sick and brought her sharply back to the present. The noises from the street outside had died down and thankfully, so had the sounds of her mother repaying Barry for an evening on the tiles and a chippy supper. It was 4am. The boy racers had finally called it a night and the helicopter had flown off into the darkness. There was still the occasional slam of a car door and the odd siren in the distance. Ruby allowed herself to doze. Surely Barry would be snoring away by now and she could get some sleep. She was dreaming of being fostered by Pippa in Home and Away and spending days on a caravan park or hanging out on the beach. In her dream, she really suited the red tartan dress she wore for school… and then her bed jerked and the strategically-piled books and alarm clock tumbled noisily to the floor, warning her of imminent danger and importantly, waking her from her sleep.

Ruby’s eyes shot open. He was there, outside the door, silently trying to force it open but there was no way he could get in because jammed into the space between the door and her bed was a chair and a chest of drawers. Ruby’s heart pounded so hard she truly thought it would explode inside her chest.

‘Are you awake, Ruby? Come on, love, don’t be shy. I only want a little chat to say sorry for what happened last time. Go on. Open the door for your Uncle Barry.’ He gave the door one more push.

Horrified, Ruby saw his fingers appear as he squeezed his hand inside, feeling around for whatever was blocking his entrance. Leaping from her bed, sheer terror and adrenaline fuelling her movements, Ruby pounced onto the chair and then leapt on top of her cupboard before lunging at the door. Using her whole body weight she rammed it hard against Barry’s wrist, causing him to groan in pain.

‘You little bitch,’ hissed Barry. ‘I’ll make you sorry when I get in there, you cocky tart.’

Spotting her pencil case lying next to where her books had been, she rummaged inside until she felt her compass. Fury, shame and terror were coursing through her veins and without a second thought, gripping tightly, she rammed the steel spike into the back of his hand. Then Ruby started to scream. If they thought she was a banshee the last time, second time around she probably woke the dead, but most importantly of all, she woke Stella.

When her mum stumbled out of her bedroom, dragging on her dressing gown and trying to force open her bloodshot, mascara-streaked eyes, Stella was met by the sight of Barry in his underpants. He had one hand trapped inside Ruby’s bedroom while her daughter screamed hysterically from the other side.

Stella may have been many things but she wasn’t naive, and knew there and then that this time she really had picked a bad one. Without hesitating, she ran over to the draining board and grabbed the frying pan, grasping it firmly in both hands.

‘Get away from my daughter you dirty bastard. It’s okay, Ruby, I’m here, love.’ Stella tried to sound reassuring and in control, just before she lost it completely and smashed the pan into Barry’s head. ‘You dirty get! What the fuck do you think you’re playing at? Get away from my girl or I swear I’ll kill you.’ Stella was livid.

From between the crack Ruby watched as he slumped to his knees so she relaxed the pressure on the door as Barry’s blood smeared fingers left red tracks all down the woodwork. Barry probably didn’t know what hit him (literally) when the cold metal whacked the back of his head. For a moment he looked stunned as he stared at his blood soaked hand and rubbed his head with the other. Ruby wondered what hurt the most, his speared hand or dented skull.

The next thing they heard was the doorbell ringing and someone shouting through the letter box. It was old Mr Kenyon from next door.

‘You alright, Stella love? D’you want me to ring the coppers? I heard you and your Ruby screaming.’

Ruby watched as Stella ran to the front door, still grasping the frying pan, and flung it open to find Mr Kenyon in his pyjamas, holding a rolled-up newspaper and a plastic spatula.

‘It’s okay, Charlie, no need for the police, as long as this scumbag is out of here in the next ten seconds. He was trying to get into our Ruby’s bedroom, the filthy pervert. Go on, get your stuff and get out!’ Stella waved the frying pan menacingly as Barry scuttled off, holding his bleeding hand, clearly too stunned and embarrassed to speak.

Returning within seconds, his shirt and jacket stuffed under his arm and holding up his trousers with his uninjured hand, Barry made his silent, shamefaced exit from the flat. Not looking anyone in the eye, he fled into the freezing night but not before Stella kicked him in the rear end as Mr Kenyon gave him one last jab with his rolled-up newspaper and a crack on the head with the spatula.

It was 7am and getting light. Ruby’s bedroom furniture was back in its rightful place and the blood stains had been wiped off the door. Her eyes burned in their sockets from crying and lack of sleep. No matter how hard she tried she couldn’t banish the image of Barry’s hand poking through the door while her heart lurched when she imagined what would have happened if he’d managed to get in. Once Mr Kenyon had left, Ruby had repeatedly insisted that Stella checked the door was locked before she could relax. Every sound made her jump, fearing Barry had come back for revenge or his shoe, which Stella had chucked over the balcony when she’d found it on the landing. It must have slipped off in his panic to get away and now lay amongst the rest of the rubbish in the courtyard below.

When daylight finally peeked through her curtains and the party people of east Manchester began returning home, only then did Ruby feel able to settle. She was utterly exhausted, both mentally and physically but needed to get some sleep because later on that day she was going to go over to see Rosie, her cousin.

It was Aunty Doreen’s birthday and, as with any special occasion, Ruby and her mum would make the two-bus journey to the south side of Manchester and spend time with the upwardly-mobile section of the family. Ruby knew full well that Doreen looked down her nose at her sister, Stella, and had been ashamed when she brought an illegitimate child into the family. Out of duty, Doreen had fulfilled the promise she made to their dying mother that her wayward sister had to be looked after, not rejected, and baby Ruby was to be watched over and cared for. This was something that her Aunty Doreen did begrudgingly without grace or kindness, whereas Rosie offered it unconditionally, along with friendship and love.

Even though the Wilson’s home in Cheshire wasn’t the most cosy or welcoming of abodes, Ruby saw her visits to leafy suburbia as a breath of fresh air and a welcome break from the bleak greyness she saw on a daily basis. The garden was beautifully pruned and surrounded by privet hedges, and even though the interior screamed out for a dash of colour it was nevertheless tastefully furnished and coordinated using an unimaginative pale green palette.

Ruby embraced all of this. To her it represented stability, and was clean enough to eat your tea from the floor but above all, it was quiet and calm. Even Uncle Jim seemed to blend in with the house, never putting a foot out of place, seamlessly merging into his armchair and the wallpaper, nodding occasionally to agree with Doreen but for the most part he kept his opinions to himself, his head down and concentrated on reading the newspaper.

Despite the bland frugality of Aunty Doreen’s cuisine, Ruby knew that whenever she was invited for a sleepover or a few days in the school holidays, there would be three home-cooked meals placed before her on the starched white tablecloth and clean, fragrant sheets on her bed. But the icing on the cake was always Rosie. Never having siblings of their own, the two cousins saw in each other the sister and companion they never had. Ruby looked up to and adored Rosie while in return, being four years older, the elder cousin enjoyed her role as big sister to the fragile, wide-eyed, eager little girl who, when they were younger, held her hand tightly and hung on to her every word.

As they grew up, and despite the fact they lived miles apart, their bond managed to survive even when Doreen temporarily banned Stella from the house after her sherry-induced, bad behaviour on Christmas Day. Ruby’s frequent lack of bus fares to make the trip alone was sometimes a stumbling block, but nowadays Rosie gave her the money for a return visit which she stuck down her sock and hid from Stella. Even when she got her first boyfriend, it didn’t get in the way and Ruby wasn’t pushed out because Rosie wasn’t like that. She was Ruby’s rock, always there in a crisis, someone wise to confide in, a much needed escape route.

By the time Ruby eventually slipped into the land of dreams her heart had lifted slightly, and a small smile lingered on her lips because in a few hours she would be with her cousin, and then everything in the whole world would be okay.

Rosie And Ruby is available from Amazon 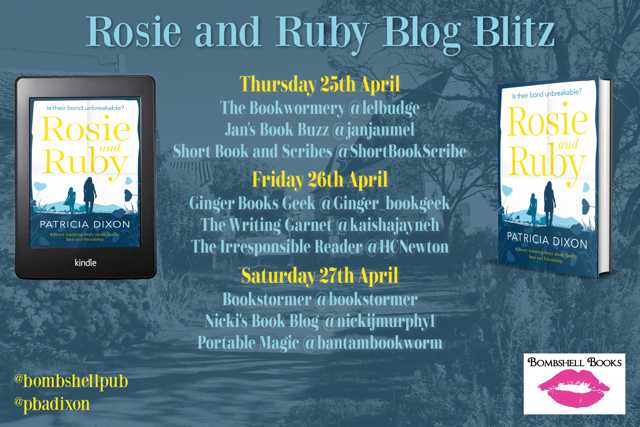