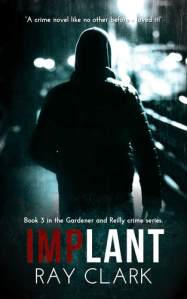 Today I am pleased to be taking part in the blog tour for Implant. This guest post is shared with thanks to Kelly at Love Books Group for inviting me on the blog tour, and of course, Ray Clark for writing the post!

Bramfield, near Leeds, a sleepy little market town nestled on the borders of West and North Yorkshire.Detectives Stewart Gardener and Sean Reilly discover the naked corpse of Alex Wilson, nailed to the wall of a cellar in his uncle’s hardware store. His lips are sewn together and his body bears only one mark, a fresh scar near his abdomen.Within forty-eight hours, their investigation results in dead ends, more victims, no suspects and very little in the way of solid evidence.Gardener and Reilly have a problem and a question on their hands: are the residents of Bramfield prepared for one of history’s most sadistic killers, The Tooth Fairy?The perfect read for fans of Peter May, Mark Billingham and Peter James.

Ray Clark writes about a holiday that might provide inspiration for a story one day.

It’s surprising how many real life incidents can influence your writing. I once visited a wonderful little place called Woods Hole, in Cape Cod, Massachusetts.

I had not booked any accommodation but the tourist information sent me to a large Colonial mansion: The Woods Hole Inn. I parked the car and the only person I saw was a South American who spoke as much English as I did Mexican. I managed to convey that I was after a room. He took me into the building, grabbed his mobile phone, called God knows who, and then passed it over to me.

The voice on the other end asked if I’d looked around? I said yes, and told him, pretty amazing: beautiful place. By now, I thought it might be best to leave: I didn’t think my budget would stretch to a room here. He said, great, pick a room and settle down, we’ll talk later. The line disconnected and I gave the phone back to the Mexican, who then disappeared.

After depositing my stuff and exploring Woods Hole, I eventually returned as it was starting to go dark. The lights were on but there was no one home. I showered and changed, went back out for a meal, returning later that night for bed and still I saw no one.

I awoke the next morning, showered and changed, opened my bedroom door into a dining room with a fully laid breakfast table. It appeared there was still only me. Concern seeped into my brain. Where was I? Nevertheless, I still ate breakfast. With the pots cleared, and a plan for the day, I took the car out, returning once again as it started to go dark. Passing an empty reception on the way to my room, I showered and changed and went back out for a meal, wondering if I would spend my entire stay alone. If I did, maybe I wouldn’t have to pay!

Returning after the meal, the lights were burning nicely, the atmosphere was serene but there was still only me. Why I locked my room I had no idea – it wasn’t like anyone was coming for me. The next morning the same thing: empty dining, full table. The first and only thought that came to mind was, The Twilight Zone. Here I was at last. I had finally entered the strange little world of Rod Serling. Leaving could be a problem. Would I be allowed to? Great story for a writer.

After breakfast I passed reception when a voice boomed out, ‘morning’. Once he’d picked me up off the floor and phoned 911 for a near fatal heart attack, we had a great laugh. He explained how sorry he was that he couldn’t be here when I arrived, but he was in hospital having an operation on his foot. The second bonus was that the room only turned out to be $85 per night plus tax: the third bonus was paying cash: he said, forget the tax.

That still ranks as one of the strangest but best holidays I’ve ever had. I remember catching the ferry to Martha’s Vineyard where Steven Spielberg filmed his smash hit, Jaws, which to this day, remains a classic.

And the strangest thing of all? I still, haven’t written that story in any form whatsoever.

Implant is available from Amazon.