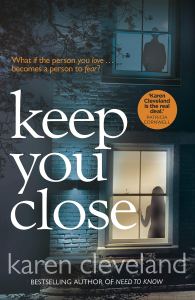 Today I’m pleased to be sharing an extract from Keep You Close as part of the blog tour. My post is presented with thanks to Anne Cater for inviting me on the blog tour and Transworld for providing the extract.

Keep You Close is the hotly anticipated new thriller

from the bestselling author of Need to Know.

You go into your son’s bedroom. It’s the usual mess. You tidy up some dirty plates, pick up some clothes, open the wardrobe to put them away.

And that’s when you find it. Something so shocking it doesn’t seem real.

And you realize a horrifying truth…

T he woman jolts awake, gasping, heart pounding. Gunshots echo in her head, ones conjured in sleep. She reaches for the other side of the bed, finds it empty. Only an indentation in the sheets, now cold.

She slips out of bed and shrugs on a robe. Pads quietly into the darkened hall, bare feet cold on the wood floor. She peers through the fi rst open door. A boy sleeps soundly, his features barely visible by the light of the moon. On to the next door. A little girl asleep in a rainbow-colored room, a night-light casting a muted glow on her innocent face. Third door now. Twin boys, asleep in twin beds. One has a thumb in his mouth. The other is snuggled up with a tattered stuffed bear.

Faint sound from downstairs draws her onward. Television, the volume low. She glimpses the screen when she’s halfway down the stairs. News, the twenty-four-hour kind. Russia. Election interference. The sort of story her husband can’t stand, always shuts off.

A few steps more and the rest of the room comes into view. The living room, cluttered with plastic toys and board games, mantel full of family pictures. And a figure in the center of the room, bathed in flickering blue light from the television. Perched on the edge of the couch, watching the screen intently. The unnatural light distorts his features. For a moment, he looks like a stranger.

He seems to sense her presence. Turns toward her, and his face breaks into a familiar, comforting smile. He mutes the television. “Another nightmare, sweetheart?” He extends an arm, an invitation to sit beside him.

She doesn’t move, only nods in response to his question.

He stands, aims the remote at the television, and the picture disappears. They’re plunged into darkness. “Let’s go back to bed.”

He walks toward the stairs, toward her, but her eyes haven’t adjusted, and he’s nothing more than a hulking shadow. He lays a hand gently on her back.

She shrinks away from it. “I’m going to stay down here.”

He hesitates, then stoops to kiss her cheek, brushes past her up the stairs. She watches him until he’s gone.

Alone in the darkness, she cinches her robe tighter. Looks into the living room, at the television screen, now black. In her mind she sees that expression on his face. Almost a smile, a twisted one. But it couldn’t be, because it looked nothing like the man she knows, the man she loves.

She tries to convince herself it was just the light. That unnerving blue flicker from the television. They don’t have secrets, not anymore.

Still, a shiver runs through her. She wraps her arms around herself.

What if he’s not who she thinks he is?

How well does she really know him?

N ighttime’s always been my favorite time to run. I like the stillness. The quiet streets, empty sidewalks. It’s not the safest time to be out, sure. But in running gear, it’s not like I have much to have stolen. And as far as assault: I’m tougher than I look. Trained in defense tactics, able to hold my own. It’s the nonrandom crime that worries me more. But if someone’s coming after me, they’ll find a way to do it, regardless.

The Reflecting Pool’s off to my left, dark and glassy. Mile six of a planned ten, all under seven and a half minutes so far. A solid pace tonight, better than usual. It’s the looming storm that’s spurring me on. We’ve had a week of early spring, unseasonably warm temperatures, the kind that coax buds from bare tree branches, tulip stalks from the soil. But the weather—it can turn on a dime here in the District, and the forecast says we’re due for one last blast of winter. Wind’s already picking up.

I pass the World War II Memorial, start up the incline to the Washington Monument. I’m in my element here. Muscles working, stretching, strengthening. Pushing myself. I’m in a light jacket, running pants that hit mid- calf. My head’s bare, hair pulled back, tied up away from my neck. Eighties rock in my earbuds, but quietly. Soft enough that I’d hear someone approach, that I’m fully aware of my surroundings.

At the top, I catch a glimpse of the White House. Off to my left, glowing bright. Still gives me a thrill to see it, even after years in the city. A constant reminder that I’m close to the highest reaches of power. And where there’s power, there’s a need for what I do.

Past the monument now, heading down the incline, picking up speed. The Capitol dome is ahead, illuminated against the night sky.

A memory fills my mind, just for an instant. Me, in that wood- paneled office, all those years ago. Him, standing up from behind his desk, coming toward me . . .

It’s that damned case at work that’s doing it, making me think of the past. I force my legs to work harder, push harder, move faster. Listen to the slap of my feet hitting the pavement, the staccato rhythm.

The National Mall stretches out in front of me. A straightaway, a chance to test my speed.

My legs are straining. There’s pain in my knee, but I push through. Not giving up now.

The dome looms large ahead. I see his face in my mind, once again. I can feel his hand on my arm, squeezing tight. . . .

I can’t change the past, can’t do anything about him, not without jeopardizing everything that matters. But I can do something about the future. I can stop someone else.

I glance down at my wrist.

Five-and-a-half-minute mile. I can feel the smile come to my lips.

I’ve got this. Tomorrow power gets policed.

Four in the afternoon, and Hanson’s already at the bar. I’d never pegged him as a drinker, back at Quantico. Maybe he changed. Or maybe he hid it well.

A bell chimes as I open the door, a tinny ringing echo. The place is a dive, narrow and dark, neon signs on the walls, a couple of pool tables, both in use. Journey’s playing on the sound system. “Don’t Stop Believin’.” I let my eyes adjust for a moment. He’s toward the far end of the bar, a glass in front of him, nearly full.

I walk over, feeling stares, ignoring them. I know I’m a fish out of water here. Black pantsuit, high heels, tailored wool coat. Plenty of bars in D.C. attract that sort of crowd; this isn’t one of them.

He turns. He’s thicker around the middle than last time I saw him, thinner on top. A smile spreads across his face. “Maddox. Well, I’ll be damned.”

He half stands, leans in for an awkward hug. Awkward because we haven’t seen each other in years, and because I can’t think of a time we’d ever hugged. Back at the Academy, he’d probably have greeted me with a slap on the back.

His face colors, like he knows it was the wrong move. Like it dawned on him, too late, that we’re not equals anymore. Not colleagues, not really. Onetime friends.

I avert my eyes from the flush, slip off my coat, slide onto the stool beside him. A bartender walks over almost as soon as I’m sitting.

“What can I get you?” she asks, resting her hands on the bar, leaning forward. There’s a tattoo on the inside of her wrist, a heart wrapped in spiky barbed wire. My eyes travel from that to her face, innocent looking.

She walks off, and I turn back to Hanson.

“It’s been too long,” he says, recovered now.

“I heard you were at headquarters, but our paths haven’t crossed.” “Till now.”

“First in our class to reach the big leagues, huh?” He lifts his glass, takes a long sip, his eyes on me the whole time.

“Guess you could say that.”

A handful of classmates are supervisory special agents, like Hanson. But I’m the fi rst to advance beyond that. Chief of a division at headquarters, albeit a small one. Internal Investigations Section.

The bartender sets down a glass of water, wordless, and moves off.

“How’ve you been?” Hanson asks.

I take a sip of my water, then place the glass back on the bar, carefully. I turn to face him. He’s aged in the past decade, no doubt about it. But I can still see the guy who sat next to me in Criminal Evidence, who sparred with me at the gym. Who brought me soup from the cafeteria when I was laid up with the flu. Shit.

“Are you aware you’re being investigated for allegations of sexual harassment?”

The pleasant look fades. His lips part in surprise, then quickly close. His face hardens. Like a light switch, flipped. “That’s why you’re here?”

He averts his eyes, and his jaw tightens. There’s a long lull. Behind the bar, I can hear the clink of glass.

“My word against hers,” he says.

I can feel anger spark inside me. “Yeah?”

“You can’t fire me for that shit.”

“How about for time and attendance fraud?”

His mouth twitches, just the smallest bit. I can see him fighting to keep his face impassive.

“I’ve had an agent on you for the past week. I know exactly how many hours you’ve worked. And how many you’ve been paid for working.”

His eyes are burning now, but I can see the worry behind the fire.

“I also know that you’re still carrying.” I nod toward the bulge at his hip. “I know that you drove your government vehicle here, and that you’re on your second glass of bourbon.” “What the hell, Maddox?” I don’t say a word.

“We used to be friends.”

He waits. He’s breathing hard, his nostrils fl aring slightly with each breath.

He snorts in contempt. “And if I don’t?”

I glance toward the door, nod in the direction. “See those two guys over there?” McIntosh and Flint are standing on either side of it, watching us. “They work for me. And they’re prepared to make a scene. Right here, right now. Breathalyzer, cuffs, the works.”

He looks back at the door, then down at his drink. His glass is nearly empty now. His fi ngers have tightened around it. Left hand’s bare, but I can see the indention where the ring usually lies.

“Your career’s over, Hanson. I’m giving you the chance to get out quietly. Face the consequences for the harassment, and this”— I nod toward the bourbon— “doesn’t become an issue. Neither does the fraud.”

Bon Jovi’s playing now— “Livin’ on a Prayer.” Fitting. “It’s your choice how it goes down.”

He glares at me. Then he pulls off his badge, slams it down on the bar between us.

Keep You Close is available from Amazon. 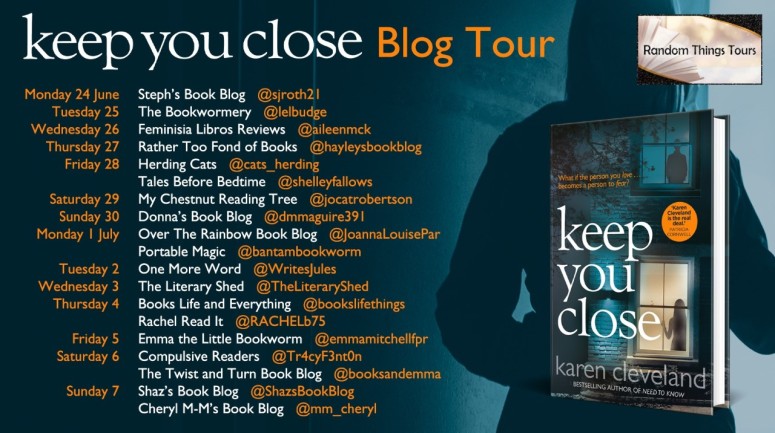