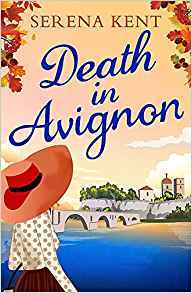 Today I’m delighted to be joining the blog tour for Death In Avignon with an extract. My post is presented with thanks to Tracy Fenton for inviting me on the tour and to the publisher for providing the extract.

When Penelope Kite attends the opening of an art exhibition on the arm of the gorgeous Mayor of St Merlot, Laurent Millias, it seems she is finally settling into life in Provence. But beneath the glamour, trouble is lurking. Shockwaves ripple when British expat artist, Roland Doncaster, collapses after choking on an olive.

A tragic accident? Or was he poisoned? Penelope is thrust once again into the middle of a murder investigation, but when she casts suspicion on one of the Mayor’s friends, she finds herself out in the cold.

As winter draws in, Penelope must rely on the friendship of her local music group – including the dashing art dealer, Gilles de Bourdan – the support of the effervescent Frankie, and her own sleuthing instincts to untangle this mystery…

It was a glorious late October morning. Under a sapphire sky, the Luberon ridge rippled down into the valley and the warmth of summer lingered. An immense, cathedral quiet seemed to stretch to the distant hills.

On the terrace of Le Chant d’Eau, Penelope Kite breathed in deeply and drew the bow across the strings of her cello.

The first note came out as a growl, followed by a low rumble. As her bowing became more confident, the tone gained in purity.

The music calmed her. Not that her jitteriness today was a bad thing. Nothing like those first weeks in St Merlot when she had been a woman in volcanic form, erupting in the heat of August. It was amazing how much she had achieved in such a short time. The ramshackle old farmhouse had been replastered and repainted. The electrical rewiring had been completed. She had recently taken delivery of a large woodburning stove, and soon she would have two new bathrooms.

Even more satisfyingly, she had made friends. And, after much anticipation, tonight was the night she was going out to dinner with the Mayor of St Merlot, the knee-tremblingly handsome and charming Laurent Millais. Third-time lucky, she hoped. Frustratingly, something always seemed to get in the way.

But so far, so good. He had called to confirm. The plan was to drop in first to the opening of an art exhibition in Avignon, and then have dinner at La Coquillade at Gargas.

Just the two of them. La Coquillade was a very smart restaurant and boutique hotel surrounded by olive groves, pools and vineyards and renowned for its romantic atmosphere.

Penelope felt a surge of excitement, then slapped herself down. Laurent was merely keeping his word that he’d take her out to celebrate the solving of two murders that had disrupted her first months in the Luberon. No need to make a show of herself.

She should try to concentrate on the music.

She was tackling a particularly fiendish passage when the familiar sound of scattering stones on the track announced an unscheduled arrival. The car clattered down the drive, spitting gravel, then skidded to a halt with the squeal of a braking system pushed well beyond its comfort zone.

Penelope knew immediately who it was. She rested her bow and waited for the click of stiletto heels on the flagstones.

Clémence Valencourt appeared on the terrace in beautifully tailored cropped black trousers, with a tight white silky top that showed not even a suspicion of middle-aged bulge, a look Penelope could only aspire to. Copious loops of costume pearls and gilt topped off with what looked like – and probably was – a genuine Chanel jacket. The petite

‘Well. If you don’t mind, I should just finish this section. It’s a tricky bit and I’ve nearly mastered it.’

‘Impeccable. You finish, and I will listen as I make us some coffee.’

Penelope ran through the difficult section a few more times until the smell of coffee became too compelling to ignore.

Clémence brought two cups outside and they sat companionable at the white café table under an olive tree in a galvanised steel planter. Sheer bliss, thought Penelope, as she tipped her head back in the sunshine. It was such a pleasure that the air was still warm enough to be able to sit outside, even in the middle of autumn.

‘Penny, I did not realise how well you played. You have many surprises for us, n’est ce pas?’

Penelope accepted the compliment – for indeed it was one – from this chic, cultured woman who had become an unexpected ally. ‘Well, I used to be so much better, but

I am getting there. It just takes time. But this is my time, the chance I longed for to take up some of my interests again. Music. Gardening. Maybe even some painting, though I haven’t done any of that since I got married.’

Penelope was itching to quiz her about Monsieur Valencourt who was away so often, but Clémence continued without drawing breath.

‘And you are an artist as well? Mon dieu, what talent has arrived in St Merlot!’

Penelope was never quite sure when the French woman was sending her up. ‘I wouldn’t say I was an artist – but I have always wanted to learn to paint properly, and here seems to be the perfect place.’

‘Yes, Penny, it is the light. Artists have come to Provence for centuries.’

Penelope hesitated, knowing that it was best she say something now, and not let Clémence find out from someone else. ‘Laurent is taking me to an exhibition this evening.’

Clémence stiffened a little. She looked up at Penelope from behind a wing of perfectly coiffed blonde hair, her eyes wide. ‘This evening . . . at Avignon?’

As an upmarket property broker, Clémence spread her net wide.

‘I believe so. He wants to support a friend – and the press will be there. He does enjoy being mentioned in La Provence, doesn’t he?’

‘He’s becoming quite vain about publicity, it’s true. It will be the opening of the new exhibition at the Gilles de Bourdan Gallery. I hear that Nicolas Versanne is showing some of his new paintings. Nicolas and Claudine Versanne – you met them at Laurent’s dinner party, remember? Claudine is director of the Museum of the Ochre Paints at Roussillon.

What a good idea to ask you to come too.’

‘Come too?’ Penelope smelled a rat. ‘Are you going?’

Penelope felt the cosy tête-à-tête with the gorgeous Mayor receding into the middle distance. She was never quite sure about the current status of Clémence’s sophisticated relationship with him. There had been a fling earlier in the year, and possibly others in the past, but that seemed to be over. And Penelope’s own feelings on the matter were complex, to say the least.

‘It’s only the evening out he promised me weeks ago, you know, after all the . . . unpleasantness in the village. We were going to go last week, but one of his friends had a crisis and he had to cancel. It’s very sweet that he’s keeping his word.’

‘I should introduce you to my musician friends,’ said Clémence, apparently not willing to be outdone as far as expanding Penelope’s social circle was concerned. ‘They play together in a group, and they are always looking for new players. They perform from time to time around the Luberon. Perhaps you might be interested in joining them?’

Penelope had always loved playing for an audience. As a closet show-off she found the exhilaration of performance addictive, and it was one of her main regrets about her staid and conventional life in England that she had given up playing in public. The idea of performing with a group in France intrigued her.

‘Well, I’d love to meet them and hear them play.’

‘In fact, Penny, they are giving a concert in Viens in a few weeks’ time. Why don’t you come along with me then?’

Viens was the village fifteen kilometres away where the Valencourts lived in some splendour. Their palatial house boasted curving marble staircases, medieval stone carvings and walls bearing aristocratic escutcheons. So far, Penelope had not been introduced to Monsieur Valencourt. Come to think of it, she didn’t even know his first name. Maybe he would be there. Penelope couldn’t help her curiosity, but Clémence had a habit of waving away anydirect inquiries.

‘That is very kind of you. I would love to do that,’ said Penelope.

Sometimes she couldn’t imagine why she had been so wary of Clémence’s brittle exterior. Her heart was in the right place. It had just taken a couple of local murders to locate it – an option admittedly not available to all. ‘By the way,’ Clémence said, pulling a pretty frown. ‘What are you wearing?’

Penelope looked down at her old Laura Ashley dress and cardigan. The comfortable canvas shoes and the bare, slightlyg oosepimply legs that she was intending to shave later. ‘I wasn’t expecting visitors.’

Her former estate agent gave her a pained look that implied any Frenchwoman worth her salt would be visitor ready at all times.

Penelope was used to this by now. Their fledgling relationship was founded on the difference between a French woman and an Englishwoman, both d’un certain âge. It went without saying that the Englishwoman knew her place as the underdog in matters of fashion. But she was learning new tricks fast. Why, it had been weeks since a single croissant had passed Penelope’s lips for breakfast, let alone two.

She listened respectfully as Clémence advised her that a well-cut little black dress was always acceptable attire at an art world gathering. In exchange, Penelope gave her opinion when Clémence asked her view on advertising property in the British press. And she put the date of the concert in Viens in her diary.

Death In Avignon is available from Amazon.