Today I’m delighted to be one of the bloggers beginning the blog tour for The Death Of Justice.  My review is written with thanks to Tony J Forder himself for inviting me to take part and to Heather Fitt at Bloodhound Books for my copy of the book.

To keep a secret hidden you must bury the truth

When DI Bliss arrives at the scene of the second murder, he recognises the same three-shot pattern as the first. But there is one major difference: the second victim has been decapitated, the head nowhere to be found. When a second headless corpse is discovered the following day, Bliss and his team realise the killer is on a spree – and he’s not done yet.

After Bliss links the killings and forms a task force with officers from Lincolnshire, they uncover further disturbing news: the murders are not the first in the series – there are four more headless victims, and the Lincolnshire team believe they know why. Not only that, they are also convinced that more potential victims are on the killer’s list.

In a race against time to save further loss of life, Bliss constantly finds himself one step behind and chasing shadows. In order to flush out the hired assassin, he and his team have no choice but to put their own lives at risk. But will everyone survive?

I was so pleased to be offered a slot on this blog tour, as I am a huge fan of this series. I really enjoyed being back with DI Bliss, DS Chandler and the rest of the team. Over the series, each character has developed and learnt from their mistakes without losing the essence of their personality, and I have loved watching them grow and learning more about them and their lives, both inside and outside the police station.

In The Death Of Justice we learn who the killer is fairly early on. What I struggled to figure out was what motivated him to kill so many people and it is this that also stumps Bliss and his team. I enjoyed trying to solve the puzzle with them, whilst gaining more insight into the killer and his lifestyle: details which are not known to the team until the very end of the novel.

The murders themselves are actually very gruesome, so much so that when I was reading late at night, I worried I would have nightmares  However, I feel this enhanced the book for me and made me root for Bliss and his team to find the killer.

I know it’s a cliché, but I genuinely could not put this book down. I didn’t want to sleep or eat until the case had been resolved. There is so much tension, which culminates in some really dangerous scenes and I was on tenterhooks the whole way through.

I can’t say much about the ending for fear of spoilers but well, I cried…

The Death Of Justice is available from Amazon. 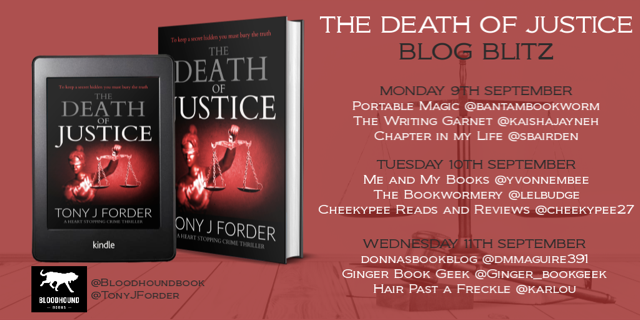