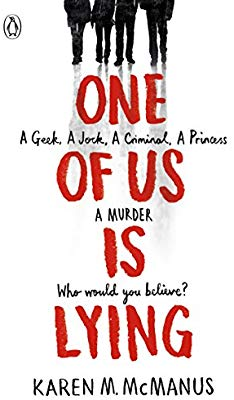 This review is written with thanks to Pigeonhole for the opportunity to read and review One Of Us Is Lying.

Sports star Cooper only knows what he’s doing in the baseball diamond.

Bad boy Nate is one misstep away from a life of crime.

Prom queen Addy is holding together the cracks in her perfect life.

And outsider Simon, creator of the notorious gossip app at Bayview High, won’t ever talk about any of them again.

He dies 24 hours before he could post their deepest secrets online. Investigators conclude it’s no accident. All of them are suspects.

Everyone has secrets, right?

What really matters is how far you’ll go to protect them.

I must admit I’ve had One Of Us Is Lying on my Kindle for a while and been a little put off by the “young adult” label. I needn’t have worried, as although the characters are teenagers, McManus does address some quite serious issues which affect adults as well as young people. She handles them very sensitively and she is brilliant at portraying the uncertainty, peer pressure and general angst that comes with being a teenager. Despite it being a long time since I was in school, I felt totally immersed in their world and felt able to sympathise with the problems they faced.

One Of Us Is Lying is told from four different perspectives: those of the students who were in detention with Simon and are accused of causing his death. This is really interesting as it helps the reader to get a glimpse into their different characters, their temperaments and the things that are happening outside school that could have given them a reason to wish Simon dead. I loved being able to discuss theories with other readers, and the mystery kept me hooked until the end. I also enjoyed watching the characters grow in maturity as the novel progressed.

Although some of my fellow readers on Pigeonhole had guessed the ending, I did not, and the surprise added another layer to the novel. I am looking forward to reading the sequel soon.

One Of Us Is Lying is available from Amazon.