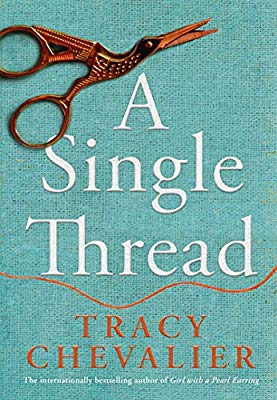 This review is written with thanks to Pigeonhole for the opportunity to read and review A Single Thread.

An immersive, moving story of a woman coming into her own at the dawn of the Second World War, from internationally bestselling author Tracy Chevalier

1932. After the Great War took both her beloved brother and her fiancé, Violet Speedwell has become a “surplus woman,” one of a generation doomed to a life of spinsterhood after the war killed so many young men. Yet Violet cannot reconcile herself to a life spent caring for her grieving, embittered mother. After countless meals of boiled eggs and dry toast, she saves enough to move out of her mother’s place and into the town of Winchester, home to one of England’s grandest cathedrals. There, Violet is drawn into a society of broderers–women who embroider kneelers for the Cathedral, carrying on a centuries-long tradition of bringing comfort to worshippers.

Violet finds support and community in the group, fulfillment in the work they create, and even a growing friendship with the vivacious Gilda. But when forces threaten her new independence and another war appears on the horizon, Violet must fight to put down roots in a place where women aren’t expected to grow. Told in Chevalier’s glorious prose, A Single Thread is a timeless story of friendship, love, and a woman crafting her own life.

I’ve never read anything by Tracy Chevalier before but A Single Thread was a wonderful introduction to her work. She does an amazing job at describing the surroundings, especially the cathedral, and I was immediately transported there by her writing.

At first, the subjects of embroidery and bell ringing sounded a little dry to me. However, Chevalier has researched them so well that she is able to make them incredibly interesting and convey to the reader how important these activities are to Violet and the people in her community. As the novel progresses, it is also easier to see that A Single Thread is about much more than embroidery and bell ringing. Among the many themes in the novel, Chevalier explores the role of women, the effect of war and homosexuality. Against the backdrop of the 1930s, I found it fascinating to see how some of these issues were treated in society at that time.

Violet is a very strong central character whose views appear to be more progressive than those held by the people in her community. I admired her independence and her determination, and these characteristics made me root for Violet, hoping that she would be able to find happiness. The other characters also have fascinating lives, finding a way through their own issues and I enjoyed getting to know them.

A Single Thread is available from Amazon.