Today I’m pleased to be taking part in the blog tour for In The Absence Of Miracles. My review is written with thanks to Anne Cater for inviting me on the blog tour and Orenda Books for my copy of the book.

John Docherty’s mother has just been taken into a nursing home following a massive stroke and she’s unlikely to be able to live independently again.

With no other option than to sell the family home, John sets about packing up everything in the house. In sifting through the detritus of his family’s past he’s forced to revisit, and revise his childhood.
For in a box, in the attic, he finds undeniable truth that he had a brother who disappeared when he himself was only a toddler. A brother no one ever mentioned. A brother he knew absolutely nothing about. A discovery that sets John on a journey from which he may never recover.

Shocking, chilling and heartbreakingly emotive, In the Absence of Miracles is domestic noir at its most powerful, and a sensitively wrought portrait of a family whose shameful lies hide the very darkest of secrets.

Please forgive me, but despite much praise from fellow bloggers and readers, In The Absence Of Miracles is the first book by Michael J Malone that I have read. It won’t be my last, as I was completely taken in by his writing style.

Despite the captivating writing, In The Absence Of Miracles is not an easy book to read as it focuses on some very relevant yet difficult subjects. As the novel is written in first person from the perspective of John, the reader learns firsthand what happened in his childhood and it is often heartbreaking. However, Malone captures the emotions perfectly and they come through every page so that the reader is able to feel what I imagine is just a fraction of the pain that the characters themselves feel. The characters in the novel are not always likeable, but as it progressed, it was easy to see why they act in the way they do and this helped me to be more sympathetic towards them. It is difficult for me to explain this in more detail as the novel had a profound emotional effect on me.

In The Absence Of Miracles is set over several locations, but the descriptions, particularly of the parts set in Scotland, are beautiful, and this is yet another technique the author used to draw me in and make sure I was hooked.

In The Absence Of Miracles is available from Amazon. 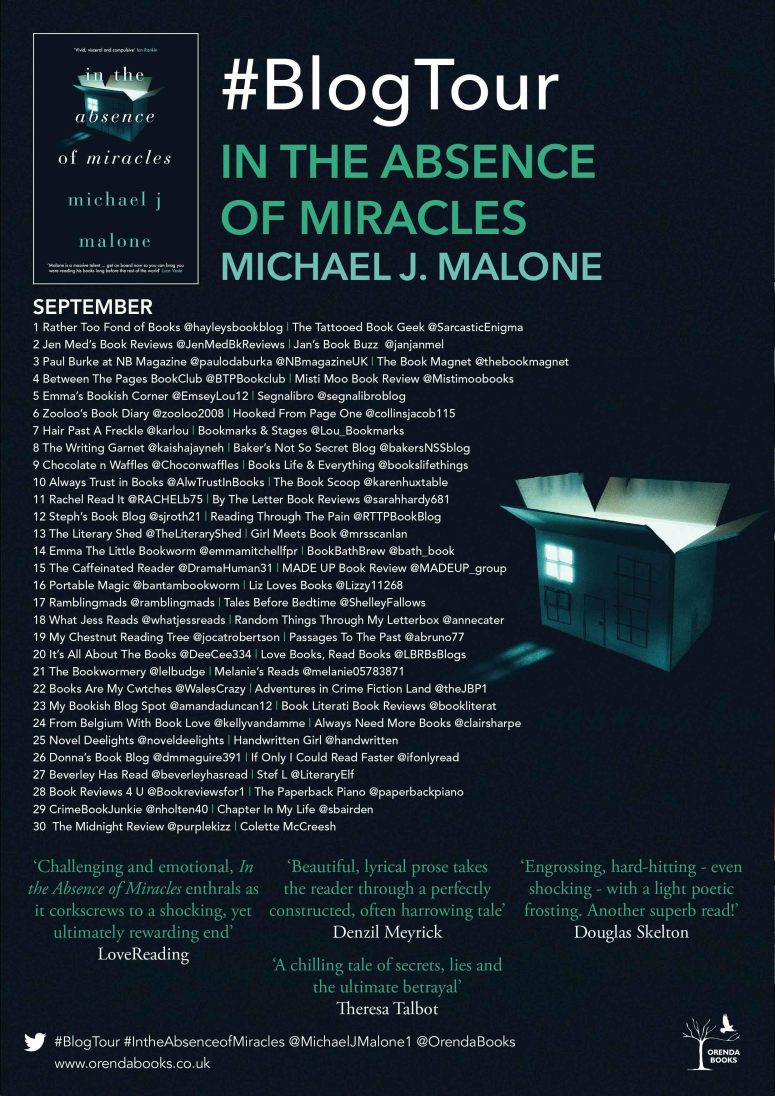 One thought on “Michael J Malone: In The Absence Of Miracles”