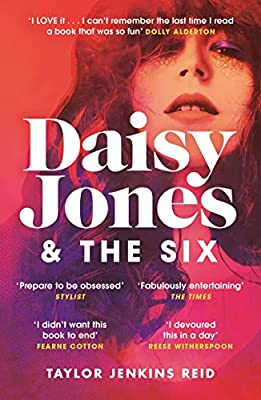 Everybody knows Daisy Jones and the Six.

From the moment Daisy walked barefoot on to the stage at the Whisky, she and the band were a sensation. Their sound defined an era. Their albums were on every turntable. They sold out arenas from coast to coast.

This is the story of their incredible rise: the desire, the rivalry – and the music.

Nobody knew why. Until now…

Having listened to and loved The Seven Husbands Of Evelyn Hugo by the same author earlier this year, I was keen to see what Daisy Jones And The Six was all about. I listen to a lot of music across a range of genres and I can’t wait to watch live music again so I was interested to take a look at what goes on behind the scenes in the music industry. Jenkins Reid has researched this aspect of the book really well and despite being a fictitious band, they are incredibly convincing.

Daisy Jones And The Six is written in the form of interviews and this came across really well in the audio version to which I chose to listen. It helped me to get to know each character better and feel empathetic towards them in the different situations in which they find themselves. Towards the end of the novel especially, I found the writing particularly emotive.

Through Daisy Jones And The Six, Jenkins Reid explores a number of issues, such as alcoholism and drug use. It was interesting to read about these issues in the context of a famous band.

There is a twist at the end of Daisy Jones And The Six, which I didn’t see coming. However, I didn’t feel that it had as much impact on the storyline as it could have done.

Daisy Jones And The Six is available from Amazon.

One thought on “Taylor Jenkins Reid: Daisy Jones And The Six”