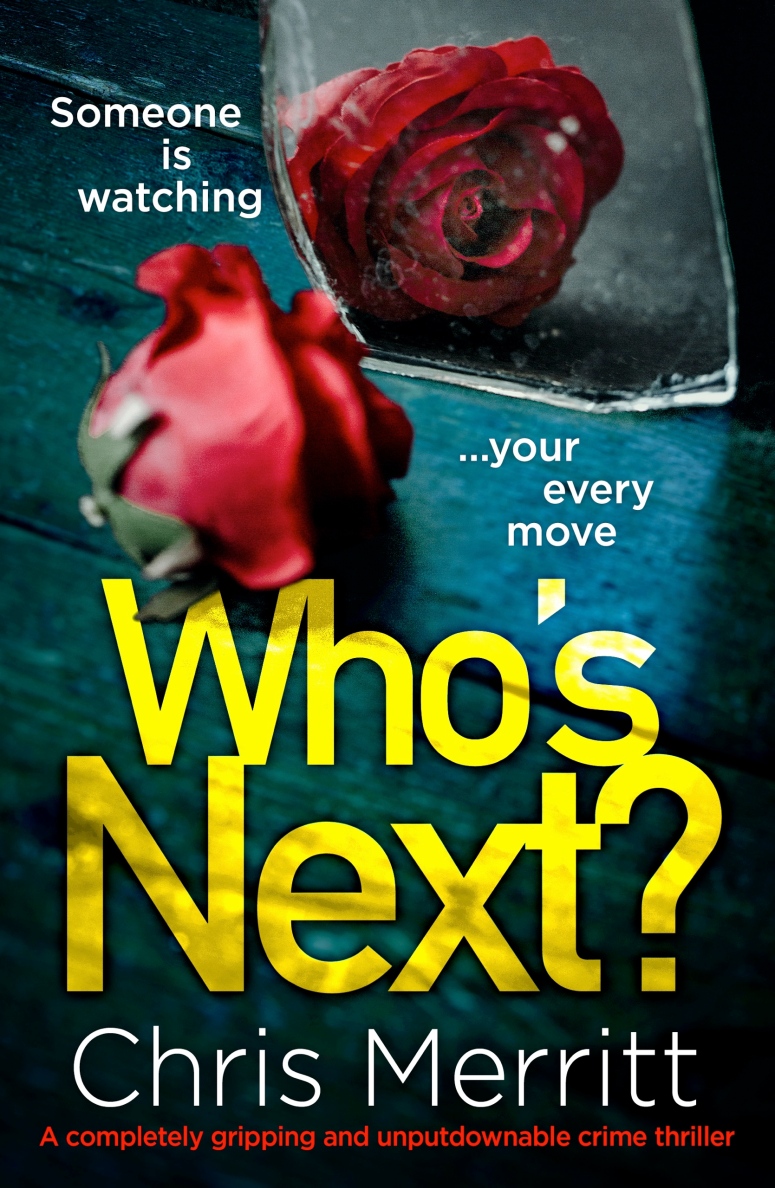 Today I’m delighted to be involved in the cover reveal for Who’s Next? , the second book in Chris Merritt’s Dan Lockhart series. What a brilliant cover! I’m so intrigued! My post is written with thanks to Noelle at Bookouture for inviting me on the cover reveal.

Stumbling to the ground, he claws at the earth around him, trying to stabilise himself, but his attacker is on him in seconds. As he stares at the lights of the bustling streets on the other side of the park gates, he doesn’t even have time to yell for help before everything goes black.

When the body of wealthy businessman Charles Stott is found dead on Wimbledon Common, covered in bruises just feet away from his luxury home, Detective Dan Lockhart is called to investigate the shocking scene. Examining the sickeningly disfigured body before him, Lockhart knows he’s dealing with a brutal killer and, as he bends down to take a closer look, he notices something on the victim’s neck: a small, crudely drawn symbol in black ink. It seems the murderer has marked his victim, but why? Dan needs to get inside the perpetrator’s mind, so he contacts psychologist Dr Lexi Green.

As the ensuing media circus puts pressure on Dan and Lexi’s investigation, another victim is found and the headlines are quick to report a serial killer is on the loose. The body of a successful lawyer has been discovered in a park with the same purple bruising and hand-drawn symbol on his neck. Dan fears that more victims will follow.

As the case intensifies, Dan uncovers a new lead on his missing wife, Jess, who disappeared eleven years ago. Determined to follow it up, he must choose between tracking down a serial murderer and finding Jess. Can he make the impossible decision before the killer strikes once more?

Fans of Angela Marsons, Rachel Abbott and Cara Hunter will love this thrilling new series from Chris Merritt. From an explosive start to a heart-stopping finale, you will not want to put this book down!

Hello! I’m a British author whose crime thrillers combine psychology, suspense, and characters you care about.

All my novels are set in London, where I live. My first trilogy starred Zac Boateng and Kat Jones, two detectives motivated by family, who tackle organised crime and police corruption. LAST WITNESS, the second Boateng and Jones book, reached #13 in the UK Kindle chart in 2019.

My second series features detective Dan Lockhart – an ex-soldier with a missing wife – and psychologist Dr Lexi Green, an American living in London. These novels are darker, more psychological serial-killer cases, with romantic relationships as a central theme.

I began writing fiction in 2014, after previous careers as a diplomat, based in Iraq and Jerusalem, and later as a psychologist working with victims and perpetrators of crime. I specialised in treating Post-Traumatic Stress Disorder (PTSD), which sparked my interest in telling stories about how people cope when faced with extreme adversity.

Now, I spend most of my time writing novels and drinking coffee while *thinking* about writing novels. When I’m not writing, I love climbing and playing basketball.

Who’s Next? is published on 11th September and can be preordered from Amazon.