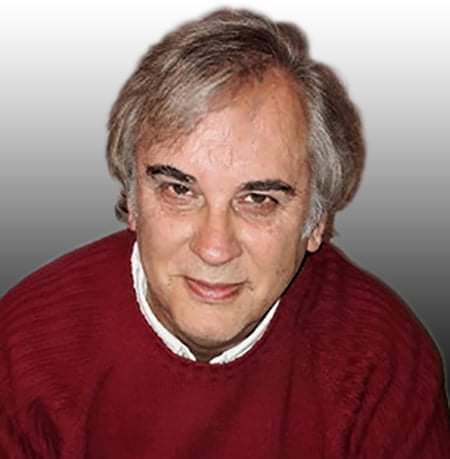 Today I’m pleased to be taking part in the blog tour for The Two Fathers. My post is presented with thanks to Emma Welton of damppebbles Blog Tours for inviting me on the tour and, of course, to Keith Dixon for answering my questions!

Have you always wanted to write?

I’ve been writing since the age of 13 and bought my first standard typewriter at 16, so the answer is probably yes!

What were your previous jobs? Have they helped you with your writing process?

My first job was as a proof-reader for Rolls-Royce, and later I worked as a copywriter, editor and writer of online learning. I’ve also taught English and American literature at graduate level. All of these jobs, of course, have kept me close to the writing and editing process. I’ve also read a lot about writing fiction over the years, which has also helped me organise how I write.

What was your inspiration for The Two Fathers?

I have a long-running character, Sam Dyke, who is a private detective working in the North West of England, so I’m always looking out for situations in which he might become involved. The initial idea for how the story begins was a news article about the daughter of Bernie Ecclestone (who used to own and run Formula 1 racing) being burgled and losing millions of pounds’ worth of jewellery. The police caught the culprits, chief amongst whom were a mother and son pair. I thought that dynamic was interesting and started the story there, later developing other characters and also a slight Brexit theme.

How do you construct your characters? Do they have traits of people you know?

I have a main set of characters in the Sam Dyke books – Sam, his son Dan and a female private eye colleague, Belinda. So most of the other characters in the books are crooks, to one degree or another. I like to give the main crook an interesting or memorable name and then build up their background and traits from there. It’s not until they start ‘talking’, though, that I really get to know them. In The Two Fathers, a character who began as quite minor built up his role because of the way he talked and thought. Because I don’t know any crooks in real life, it’s hard to incorporate any of their traits!

What does your writing process look like? Are you a plotter or a pantser?

I began as a pantser, with just three points in the book worked out: beginning, middle, end. However, I found that was taking me too long and too much angst to complete the books, so I moved to plotting quite fully. I also began to read more about the structure of novels and how readers respond to particular structures and events, so I became more conscious of working them into the books.

How did you research The Two Fathers? Did you enjoy it?

The main research I had to do was connected with how florists operate! I now live in France, so it’s increasingly difficult to do the kind of research I did while in the UK, but fortunately YouTube is pretty good – you can find out everything about everything on there. Most of the detail about the locations and travel and so on I was already familiar with because I lived and worked in that area for years.

Who are your favourite writers? Are you influenced by them?

Big question! Top favourite is probably F. Scott Fitzgerald, followed by Gore Vidal. In the crime field, there’s James Lee Burke, Elmore Leonard, John Sandford and many others. I find I take influences from all of them. For example, I’ve started using short sections in my chapters, which is a direct influence from Sandford. I try to let my dialogue be confrontational and accurate to people’s patterns of speech, which are influences from Burke and Leonard.

If you could invite three people, living or dead, to dinner, who would they be and why?

Gore Vidal, because he’s both well-read and funny. Kurt Vonnegut, because he’s funny and has an interesting, sideways-on view of humanity. And Groucho Marx because he’s … well, he’s Groucho.

Who would you least like to be stuck in a lift with and why?

My first girlfriend – too embarrassing!

Who would you like to play the main character of The Two Fathers in a film or TV series?

A few years ago it would have been Sean Bean, because he’s from Yorkshire and has the bulk and gravitas necessary for Sam Dyke. These days it might be Sam Riley, who I saw in Pride and Prejudice and Zombies (! A better film than you might think …) and is also from Yorkshire and about the right age.

What do you like to do in your spare time?

At the moment I’m putting together a series of YouTube videos on individual books by crime writers, on the channel Crime Writing Confidential. I also read a lot and eat too many croissants.

What is next for you?

Currently tossing around some ideas for a next book, which is likely to be a thriller and not part of any of my series. A lot of research required, though!

The Two Fathers is available from Amazon.

2 thoughts on “Q&A with Keith Dixon”